So today I found out that the ice cream chain Baskin Robbins was retiring approximately five flavors. This news was not really much of importance at first. Until the flavor French Vanilla came up. Seems that French Vanilla, along with Campfire S’mores, Apple Pie a La Mode, Caramel Praline Cheesecake, and Superfudge Truffle are no more. Sheesh, just reading that added an additional five pounds.

This arose my curiosity. I remember when I was a child, and my mother always insisted that I didn’t like chocolate. My so-called ice cream preferences were either vanilla or strawberry. Never did recall an allergic reaction to chocolate. As a matter of fact, my current sweet flavors is either chocolate or strawberry. If I really want to indulge, there’s always peanut butter mixed with chocolate. Any flavor really, but not vanilla too much.

One of my first ever jobs actually was working at a Haagen Dazs shop. Hated that job. Only lasted a few months. Afterwards, my chump change went to Ben & Jerry’s. Although I do remember Steve’s ice cream.

As if I didn’t have anything better to do, I telephoned my mother. As the phone rang, memories of having Baskin Robbin ice cream inside a mini baseball cap came to mind. Besides, I wanted to know if she ever got me the French Vanilla.

Speaking of forgetting, I forgot that my mother’s memory is pretty much shot nowadays. Against better judgment, I decided to press the inquiry a slight further.

“Mom. Was it true, I really didn’t like chocolate when I was a kid.”

Mom: “No, you loved chocolate when you were growing up.”

Me: “Then why when I was growing up, you would always insist that I didn’t like chocolate. You claimed that my favorite flavor was vanilla…”

Mom (interrupting me): “Oh, you liked chocolate. You liked it a lot. It’s just that whenever you had chocolate ice cream, you would make a mess. So I got you vanilla instead.”

Leave it to memory loss for a confession. Wonder what else I should know about.

After I hung up, went outside in 93 degree hot weather, and walked down the block. Decided to have the French Vanilla before it went into ‘Deep Freeze’ retirement. Went inside to the local Baskin Robbins which has merged with Dunkin Donuts. Only this local Baskin Robbins didn’t have all of the so-called “31 Flavors.” Since it was sharing space with Dunkin Donuts, it only had about ten flavors on display. Oh, and no French Vanilla. They did have the plastic mini baseball caps. One out of two ain’t bad. Even if I was wasting money on franchise corporate crappola a la mode.

Anyway…here’s a quick illustration I did in honor of ice cream. 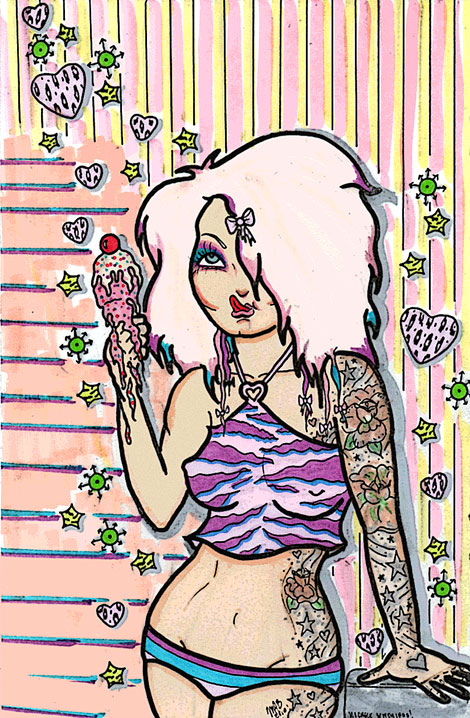 ← A Splendor Of A Life
Shitty Mickey Is Back! →