This week’s Caturday sketch is based on the latest edition to the Witchipoo household. As you might have read on a previous post, Squeaky Squeakums passed away. Squeaky was the basis of my self published comic, The Temptation of Squeaky, released Spring 2019.

The Tempation of Squeaky. Spring 2019. Written and drawn by Michele Witchipoo. On WitchesBrewPress.

At first I wasn’t ready for a new cat. Eventually a new friend, a local resident who specializes in rescuing cats had a suggestion. She introduced me to a all black cat male who followed her home during a cold, rainy night. This woman suspects (no proof) that this cat came from an Italian family owned fruit stand within the area. So during the Thanksgiving weekend this cat moved in. Everybody, meet Mr. Jet Alister.

Most cats crave meat and fish scraps. Not Jet. He loves bread, pizza crusts, and pasta. This boy likes his carbs. Last night as of this post, he was going after my late night garlic knots. (FYI – Garlic is not recommended for cats.) I used to talk to Squeaky in broken German phrases when she was alive. Yesterday Nettie recognized the German words. This time I ask Jet if he’s Italian. While him and Netzach Wondercat (aka Nettie) aren’t exactly buddies, he’s made himself quite at home. I tell him he’s “sexy” and a “weirdo.” I’m sure he’s thinking his human is the real weirdo.

Mr. Jet Alister, while Netzach Wondercat, aka “Nettie” in the background.

So, in honor of Caturday, I present to you, Pizza Cat. The Caturday sketch of the week. 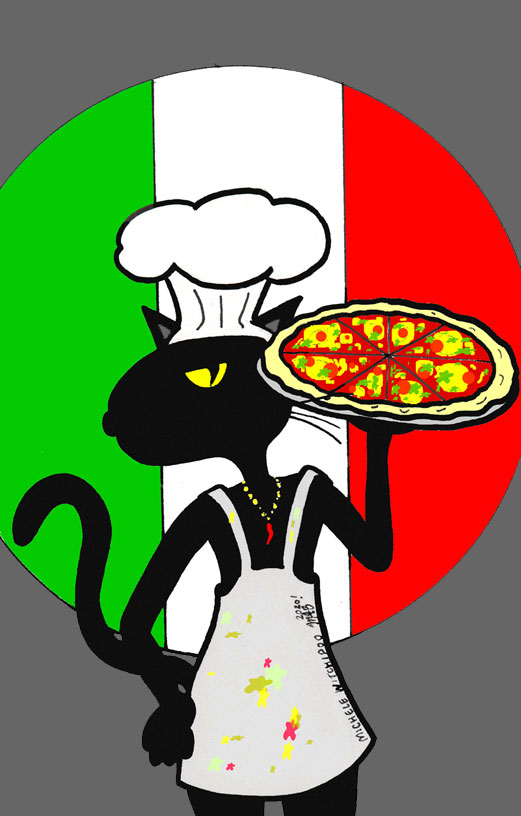