Around Labor Day weekend 2019, I got tickets to see The Alarm and Modern English over at the St. George Theater. When I first started to seriously explore Post-Punk and imported music from the U.K., The Alarm was one of the first bands I brought an album of. The vinyl was brought at some shop on West. 8th street during the early to mid-’80s. It was a choice between an Canadian Punk band called D.O.A, or The Alarm. The Alarm won out. Imagine if I had brought that D.O.A. release? Fret not. For a while I attended the CBGB’s Hardcore matinee during its prime, where I saw bands like Government Issue and Corrosion of Conformity perform.

Now that I’ve seriously dated myself, back to The Alarm. While I loved the big hair and Welsh cowboy look, eventually I went further into more underground bands. It wasn’t until I heard The Alarm was playing at the landmark St. George Theater that I realized, I’ve never seen this band live. Looking for an excuse to visit the restored St. George Theater again, I invited my friend along, and off we went.

I’ve mentioned the St. George Theater in other posts. It’s a gorgeous piece of architectural history. First had a chance to check it out when I went to see The Psychedelic Furs for the third time back in 2018. (First time in 1986, second time they were opening for The B-52s and The Go-Gos, back in the early 2000s, somewhere in New Jersey.) It’s not far from the Staten Island ferry either. The venue sits on a cute block that had a bar, a decent Italian restaurant, and a comic book store with an old school collector’s vibe around the corner. (A shout out to HypnoTronic Comics – here’s their Instagram: hypnotroniccomics)

As my friend and I walked towards the venue, we accidentally ran into Mike Peters himself. The front man from The Alarm nodded and said hello to us. That’s when I should’ve known it was going to be a good night.

Usually the St. George Theater books acts for the Geritol or family crowd. That, and the fact that I live in Queens means I visit the venue very often. On the scorecard, two out of the three times I’ve had a good time at the St. George. Psychedelic Furs was great. Buster Pointdexter along with Southside Johnny and The Asbury Dukes, not so much. To be fair, I only went for Buster Pointdexter, aka David Johansen.

The opening act was Gene Loves Jezebel. Wow. Now that’s a band I haven’t heard of in years. I saw the original Gene Loves Jezebel line-up way back in 1986 at The Ritz, where Webster Hall stands now. Gene Loves Jezebel had some good songs back in the day, particularly with ‘Desire.’ The fact that they were good looking brothers didn’t hurt either. Suppose you can say that the Aston brothers could be considered Goth heartthrobs. My second time seeing Gene Loves Jezebel in 2019, it was just Jay Aston with a back-up band. Still just as good. 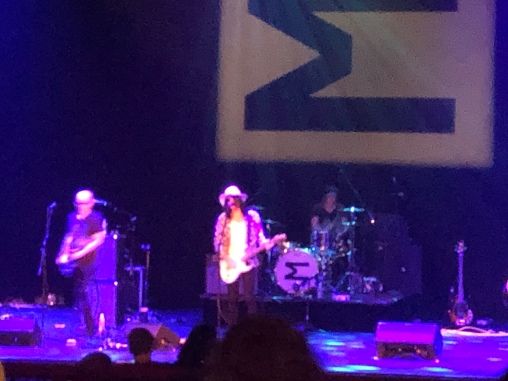 After his set, my friend went to the ladies room. She came back to her seat saying Jay Aston was walking around meeting fans. We left our seats and like my friend, I ran into Jay as well. Just like him and his brother were back in 1986, Jay was still such a flirt! The old charm was still there. He even called me ‘beautiful’ even though I didn’t believe it for one second. Maybe if global warming wasn’t in full effect, then I wouldn’t be sweating so much. It was still endearing to see Jay work his natural charm. 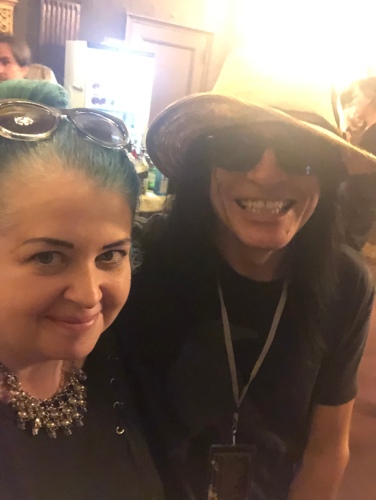 A month or two after this gig, I ended up seeing Jay Aston live again. He was performing solo, doing new material. It wasn’t bad at all. He was opening for Theater of Hate and Chameleons Vox (Mark Burgess, from The Chameleons U.K.) over at St. Vitus. If you’re interested in what Jay is doing now, go to his SoundCloud page.

Back to the gig at the St. George. Next up was Modern English. They’re mostly known for that one big hit ‘Melt With You.’ That song was played so much during my youth, I got sick of hearing it. I remember another friend showing me photos of when Modern English first hit American shores, and she had taken back in the ’80s, when they were doing a signing, possibly at Tower Records. Now in 2020, I’m looking at the band behind the concession stand, signing again for fans. 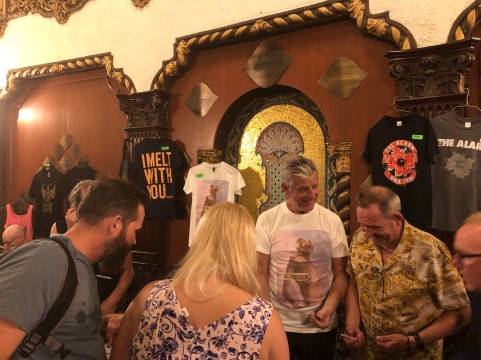 So they get on stage. During the Modern English set, the lead singer, Robbie Gray had moments of that British sarcasm. Like when they played a song from a later album, and he acknowledged that maybe only ten people heard it. Grey quipped some more biting humor when he pointed out that the venue was only half full. He wasn’t wrong.

Next up was the headliners, The Alarm. By then the theater was a little more than half full. A mixture of fans, and Staten Island residents looking to do something on a Friday night. Despite not being sold out, there was still a bit of excitement in the air.

It also dawned on me that both The Alarm and Jay Aston were from Wales. Some years back, I had done illustrations for books about Welsh history. Plus my good friend lives in Wales. After the concert, my Welsh friend contacted me about The Alarm gig. He wanted to know how the concert went. He went on to explain that Mike Peters and his wife are cancer survivors. Which Peters did bring up during the course of the show.

During a few songs, Mike Peters jumped into the audience. As you can see with the video footage. Security was trying to get people to sit back down, but after all, it’s still a concert. Even if it’s a rock concert playing music from thirty years ago. One audience member kept on defying security, as he was dancing in the aisles during both Modern English and The Alarm. He would be told to sit back down, which he did. Eventually the music came over him, and the guy would start dancing in the aisles again. By this point, most of the locals left, and it was left up to the fans. The fans loved every moment.

The apex of the night was ‘Rain In The Summertime.’ One other guy sitting in orchestra got lost in the tune, and danced away. After that song, my friend simply said “that was epic.” Which it was. It was really an awesome night.

I’ll leave you with a sketch or illustration I did of The Alarm during their classic ’80s line-up. Now I can cross off The Alarm off my concert bucket list. 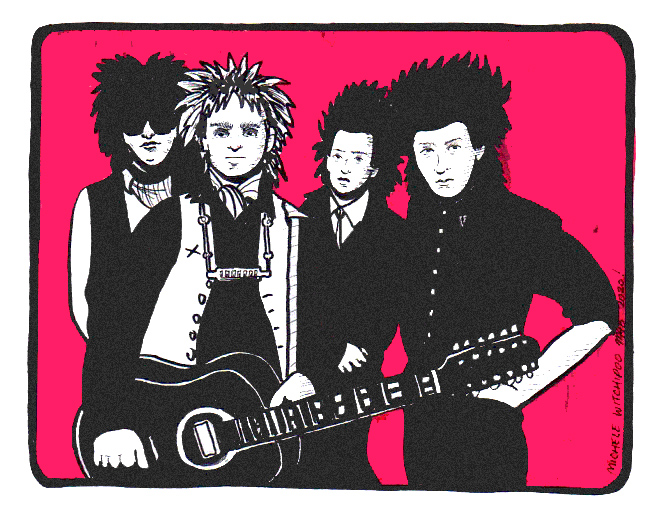 The Alarm during their classic ’80s lineup. Illustration by Michele Witchipoo, Feb. 2020.