As we are only a few days into 2020, Psycho Bunny has a message. 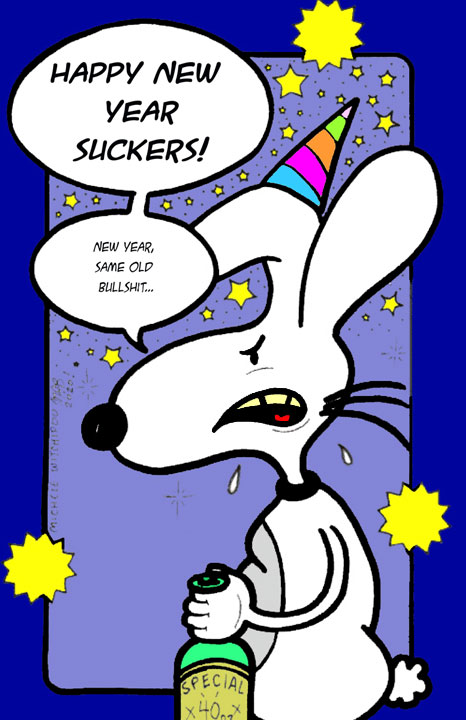 Psycho Bunny’s message for the new year. Jan. 2020. Based on the comic written and drawn by Michele Witchipoo on WitchesBrewPress.

The year 2019 wasn’t the worst, but it wasn’t the greatest either. Maybe I’ll explain in another post. The previous year started strong. As it went along, it started to go down a slippery slope. It wasn’t a total loss. I saw a lot of great concerts in 2019. Did well in all the comic cons I vended in. My work was exhibited many times during the second part of 2019. I had my own radio show for a few months. It wasn’t all bad.

Last year I also discovered who my real friends were. The concept of what friendship is a rather fickle concept. When the fakes leave your life, consider it a blessing in disguise. For example. The red flags was all in the gossip. If a salon owner (*cough-cough* – Second Star Salon – *cough-cough*) is going to viciously gossip about a client’s sex life, imagine what is being said about you. Silence is really golden. So it’s not really a loss. Instead of being bitter, I just appreciated valid ones. Sometimes knowing who your real friends are is worth more than having all the so-called “connections” in the world.

After a few of my personal experiences, I did a few inventory checks. I can do without the gossip, the pettiness, the backstabbing, and trying to appease others. There is something beautiful about being genuine. No longer do I take people’s word at face value. Read between the lines. A person can say the most soothing words, but actions speak louder than words. Emotions can trick you. Comfort is sometimes an illusion.

Someone I’ve known for a few years now always tells me “not to rock the boat.” I don’t know about that. Don’t rock the boat for whom? I discard that advice just like how people quote “stay in your own lane.” People who give out advice like that are only protecting themselves.

Anyway. Despite what’s happening with various world events, there still might be a shred of hope. A year doesn’t reveal much of itself until March rolls around. The winter months is a good time to lay low. Despite the cold temperatures, it’s a peaceful time.

Speaking of which, this week I will be in another group exhibit. I’ll post the details in another entry. The exhibit will be at some cute swanky place, Greenpoint, Brooklyn.

I also put some new additions in my RedBubble shop. Like that stupid Art Basel banana. Go to my online store and check it out yourself.

Now, for the usual promos. Because I have to eat more than just bananas.

Want to buy some of my designs? There’s RedBubble: Witchipoo

My latest comic will be hopefully, released this upcoming Spring: 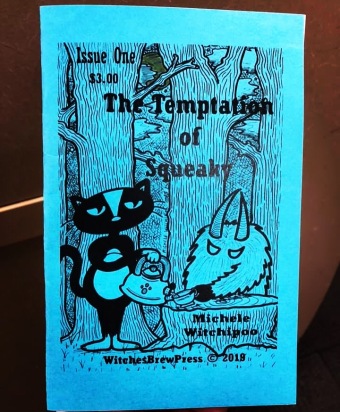