Don’t watch many televisions shows nowadays. There’s a few exceptions. Got to watch season three of Stranger Things. Stranger Things is the popular Netflix series, very loosely based on The Montauk Project and The Philadelphia Experiment, combined with early to mid ’80s nostalgia.  The only reason I bothered to check out Stranger Things was The Montauk influence. After viewing season one, I was hooked.

As for both The Montauk Project and Philadelphia Experiment, those were conspiracy theories I had an interest in during the early 2000s. Although I never went so far to obtain a tin foil hat, I would entertain these theories. That was until 2016, when the phenomenon of fake news took over. Now all these conspiracy theories weren’t as amusing. Besides. Many of the hardcore conspiracy theorists were just plain nuts. You could say I lost my patience.

However, there is a special place in my heart for Montauk. If it wasn’t for my previous interest, I would have never bothered with Stranger Things. Once during the summer of 2000 or 2001 before 9/11, I spent a day trying to explore Montauk. I didn’t locate Camp Hero, but I did find the whole complete book collection in the Montauk Public Library.

We cannot deny though, that Stranger Things is one of the few decent television series. Season three did seem heavy on the mid ’80s kitsch, product placement, and adolescence romance. My new favorite character from Stranger Things was one I loathed; Billy Hargrove. Billy was the mean scuzbucket metal head. If you weren’t careful, he just might bang your wife. His thin porn ‘stache makes a nice touch. A few hours before working on this blog post, I wasted an hour online discussing Billy’s potential playlist. In my own theory, I figured there was two. One was for Billy himself, as he speeds down the road in his muscle car. Most likely he would blast Motley Crue, WASP, and David Lee Roth era Van Halen. The other one was when he gets together with the MILFS. He’ll get down and dirty with the Mrs. as Journey plays in the background – just before the husband gets home from work. Before I go any further, a round of applause is due for Australian actor and poet Darce Montgomery. Montgomery completely nails the role of the ’80s burnout lowlife. But I digress.

Might as well wrap this up with a long awaited Psycho Bunny sketch of The Week. From speculations, yes, this week’s sketch is Stranger Things influenced. If more time to spare, I could’ve done Billy fan fiction. Luckily there’s things I have to work on. Meanwhile, enjoy the Psycho Bunny sketch of the week for July 15th, 2019. 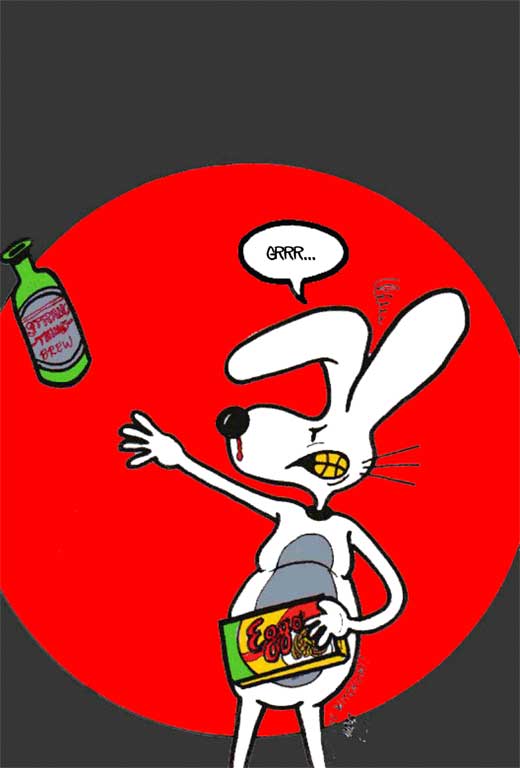 Psycho Bunny does Stranger Things with beer. Based on the comic written and drawn by Michele Witchipoo. July 2019.

Get yourself some cool stuff on RedBubble, featuring my designs.

…and again. Buy my latest comic. The Temptation of Squeaky. It’s about a well-fed cat who meets up with a demon in hope of getting more treats. Just to clarify, it’s not a “satanic Garfield.” That’s a flippant and lazy description. I suggest you find out for yourself. Ordering online it’s $4.00 ($3.00 + $1.00 S&H). 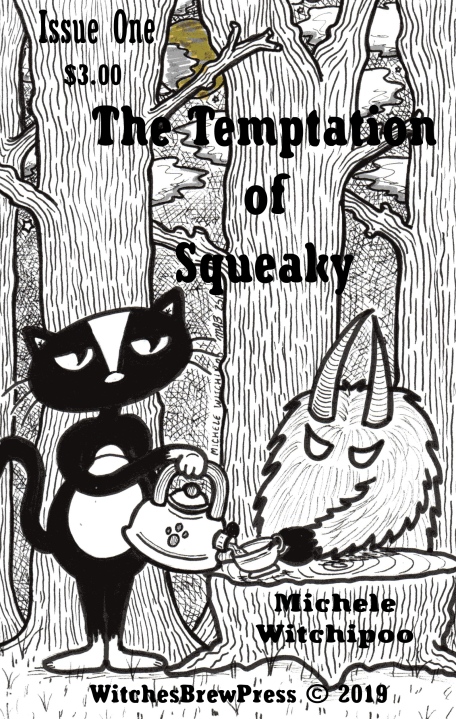 The Temptation of Squeaky. Comic written and drawn by Michele Witchipoo. Released this year on WitchesBrewPress.