This past weekend was New York Comic Con 2018. NYCC for short. I spent all four days at Javits Center, and now I’m literally exhausted. Was it worth it? Absolutely.

While NYCC felt like a second home, the MTA was an entirely different story. What genius decides to close off the 7 train stop right during the busiest weekend in the Hudson Yards area!?! On Saturday I decided to attend the CBDL after con party. Made the mistake of taking that wretched shuttle bus. It was the cattle call from f’ing hell. The bus driver himself had no clue what he was doing. Instead the driver did this zig-zag route that barely made it to West 44th street. The original destination was West 42nd street. The L train chimed in by doing it’s shuttle run from Williamsburg instead of it’s usual run to Canarsie. Then the R train joined in the fun.

Once inside NYCC, it was smooth sailing. If the subway didn’t drain you first.

Due to my exhaustion, I will blog about NYCC 2018 in another post. Lots of photos, panel reviews and good times. In the meantime, here’s the Psycho Bunny sketch of the week for Oct. 8th, 2018. 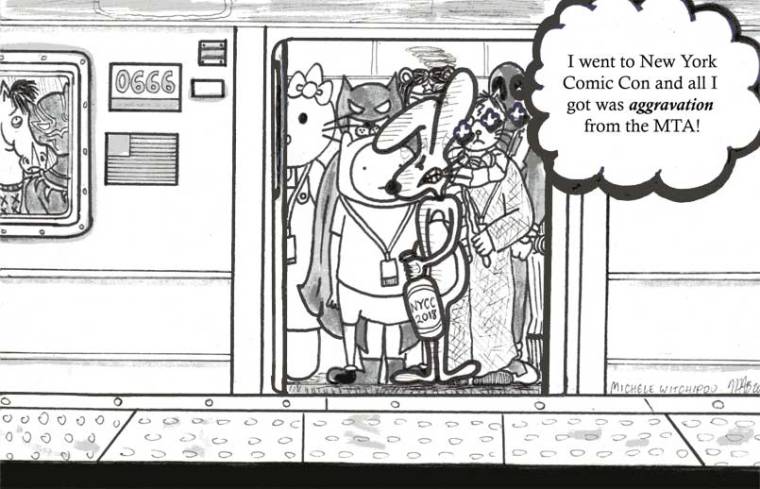 Psycho Bunny tries to commute to NYCC 2018. The MTA has other plans. Based on the comic written and drawn by Michele Witchipoo on WitchesBrewPress. Oct. 2018.

End of October, I will have a table at a small comic con in Upstate NY.