Last week was Ganesh Chaturthi. For those who don’t know about Ganesha, he’s one of the most important gods in the Hindu pantheon. In order to work with the other deities, one must go through Ganesh first. He’s the remover of obstacles, patron of arts and sciences, and the deva of intellect and wisdom.* The main day for Ganesh Chaturthi this year was September 13th. In 2019, the holiday will fall on September 2nd.

Back in 2002, I had a job in some quasi ‘New Age’ store. It sold tarot cards, incense, bland Flax brand clothing, spiritual/esoteric/occult books, jewelry, statues and other curios from around the world. The store was located on East 6th street, in NYC’s East Village area. Sixth street was a row of inexpensive, brightly lit Indian restaurants, so this shop stood out. It did sell Ganesha related merchandise. As usual I sketched on the job when I was supposed to be doing something else. That was around the time I did my first Ganesha sketch, completed in colored pencil. Both the store and the original sketch are long gone. The shop went out of business in 2003, six months after I quit the job. Despite the joy of never having to deal with that ugly Flax clothing ever again, there’s still fond memories of the place. My former manager was a practicing Hindu; his main deity was Kali. He encouraged me to find my own path, interests, etc., but was also very down to earth. In fact, when it came to the general population, he was just as cynical as me. Retail does eventually bring out misanthropic tendencies. That guy was one of the best supervisors I ever had.

Although my former manager was kind enough to share some of his wisdom, I didn’t come back to Ganesh until years later. It was the advice of a current friend that turned my interest back to the elephant god.

It was time for a new Ganesh illustration anyway. This one was completed within the past 72 hours. It was done in pen, ink and glitter watercolor. I’ve been working a lot with glitter watercolor lately. Even if the shimmer doesn’t come out too good in the scans. In person the result is lovely. The glitter watercolors I use has a good balance, so it doesn’t look tacky. Thinking about turning this piece into either prints, greeting cards or both. 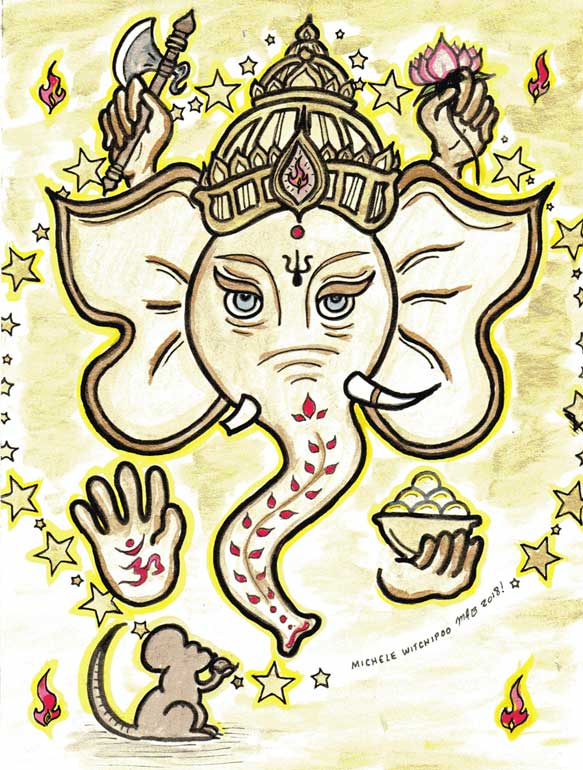