When I caught the Culture Club and B-52s concert at Forest Hills Stadium, there was another concert around the corner. That same weekend I went from ’80s Pop/New Wave to Thrash Metal. The next day was Slayer, performing at Jones Beach, Long Island, NY. 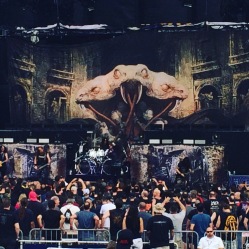 The line-up for Jones Beach was Napalm Death, Testament, Anthrax, Lamb of God and of course, Slayer. It’s a rare thing when a band goes out while still on top, and that’s exactly what Slayer did. Although there’s a part of me that expects a ‘reunion’ tour in roughly five years.

All the bands were great. Lamb of God, the band right under Slayer on the bill, had their own followers. When the intro music came on, this Lamb of God fan stood up at attention, dead serious. He was ready for battle or something.

Then there was the Slayer greeting. It’s just one word: “SLAYER!” Observing the crowd, it’s usually said with male aggression. If one wished to expand the tribal greeting some more, you can go “FUCKIN’ SLAYER!!!” I witnessed men looking at each other, shouting the greeting “SLAYER” to each other. One guy in back of where I was sitting was shouting “SLAYER!!!” until he was beet red. Dude, calm down.

Slayer is also one of the few concerts you can attend wearing the shirt of the band performing. Most people look down upon this. I don’t, but others think it’s some kind of fashion faux pas. With Slayer, not only is this acceptable – it kinda makes you look slightly bad-ass.

This leads to the Psycho Bunny sketch of the week. Psycho Bunny does Slayer! However, Psycho Bunny isn’t normally a Metal head. His best and perhaps one of his only friends, is a die-hard. Loves Metal. Thrash, Groove Metal, classic Metal, you name it. He even likes classic Hardcore and Punk. But when Psycho Bunny suddenly gets into Slayer, Buddy Bear becomes suspicious.

Psycho Bunny does Slayer. Buddy Bear thinks Psycho Bunny is a poseur. The Psycho Bunny sketch of the week for August 21, 2018. Based on the comic book written and drawn by Michele Witchipoo.

One of my hobbies is documenting what goes riding the NYC subway lines: Wildlife On The MTA. Cause if you can’t laugh, you’ll cry. MTA passengers know what I’m talking about. Even better: My WildlifeOnTheMTA Instagram is active once again.

Come back next week for a new Psycho Bunny sketch. Better yet, order my shit. Otherwise there’s going to be some Payback.