One of the things I hate are fireworks on the Fourth of July. Always thought they were kind of stupid. Okay, I get the significance of such. However, every July 4th, lots of people get idiotic. Just don’t see the point in blowing up stuff.

In the U.S., especially once you drive out of the major cities, you’ll come across lots of those fireworks superstores. You’ll especially come across them in the South and Midwest. It’s amusing to find them in trucker stops. It used to be a slight novelty to me because fireworks are illegal in New York City. Once you hit an area like rural Pennsylvania, buying fireworks is as easy as apple pie.

What really impresses me are those who do historical reenactments, such as the American Civil War, or The American Revolution. That to me, takes dedication, intelligence, and skill. A bit of imagination never hurt anyone. Personally, I never took part in a real life reenactment, but love the period outfits.

One drawback though is people tend to romanticize history. For starters, people often forget about Native Americans. Second, in reality, those who fought on the colonial side against England, went into battle despite everything. Many on the American side were so destitute, they fought barefoot. When wintertime came, those without proper footwear wrapped rags around their feet. You could see the bloody footprints in the snow. Another interesting fact was during the American Revolution, England had spread it’s military so thin. Remember, at one time, Great Britain was actually a genuine empire. As in ‘the empire on which the sun never sets.’ It applied first to the Spanish Empire, then the British. Due to this, the British brought in German Hessians. In other words, paid professional soldiers to do the dirty work on England’s behalf. Yet some Hessians decided to stay in the States after the war. Of course, if it wasn’t for France’s help, we still might be pledging allegiance to the U.K.

There’s a whole lot more to the American Revolutionary war, which leads us to what we now call Independence Day, or simply known as the 4th of July. The United States is still a relatively new country compared to the rest of the world. Some, including myself, feel that right now, the U.S. is in a very dark period. You may not even feel like celebrating July 4th. Therefore it’s important to reflect on this country’s roots, both good and bad. July 4th isn’t all about fireworks while barbecuing in the backyard with time off from work.

Not going to get too political here. Politics never brought people together. Music, art, education, science and love; that’s what brings people together. So here’s the Psycho Bunny sketch of the week for July 4th, 2018. 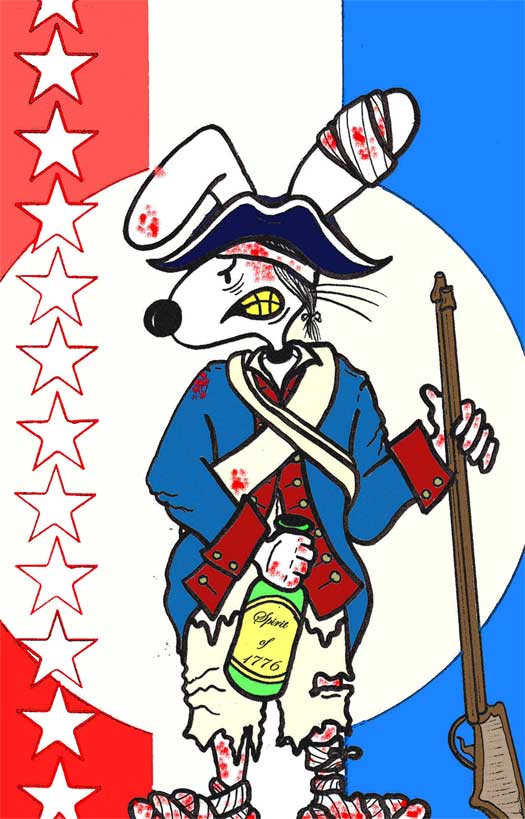 Psycho Bunny does the American Revolutionary War. Psycho Bunny sketch of the week for July 4th, 2018. Based on the comic written and drawn by Michele Witchipoo on WitchesBrewPress.

Get yourself some cool stuff on RedBubble, featuring my designs. There’s dresses, tee shirts, notebooks, etc. The notebooks, and the Quentin Crisp tees seems to be one of the best selling items. Just in time for Pride.

One of my hobbies is documenting what goes riding the NYC subway lines: Wildlife On The MTA. Cause if you can’t laugh, you’ll cry. MTA passengers know what I’m talking about. Even better: My WildlifeOnTheMTA Instagram is active once again.

Come back next week for a new Psycho Bunny sketch.

← A Different Kind of Mermaid
Leave Me A Link and I’ll Share Your Page!! →