Over the weekend, a few events happened. One was The Misfits with the original line-up live at the Prudential Center in Newark, New Jersey.

No, I didn’t have tickets. It’s okay. I met Jerry Only back in early 2001, when I was in Las Vegas for a week. Later years, got my Misfits collector doll signed over at Forbidden Planet in NYC. (Psycho Bunny was sold in Forbidden Planet back in 2004, in the self-published/indie section)

There was the L.I.C. Open Studios event which happened all weekend long, near where I grew up. Alas, didn’t make it to any of my friends’ exhibits in time.

The other event that happened, well you’re probably sick hearing about it. It was the British royal wedding between Prince Harry and Meghan Markle. Normally I wouldn’t care about weddings. Certainly don’t give a toss about some Hollywood actress. However, the English side of me was just a tiny bit slightly curious. Not enough to get up 5am to watch the wedding live though. Just curious enough to attend a friend’s royal wedding party over at her fabulous salon, while sipping some pink blush champagne.

So if the worldwide coverage wasn’t enough to make you roll your eyes, there’s always the Psycho Bunny sketch of the week. Where Psycho Bunny uses any excuse to party. 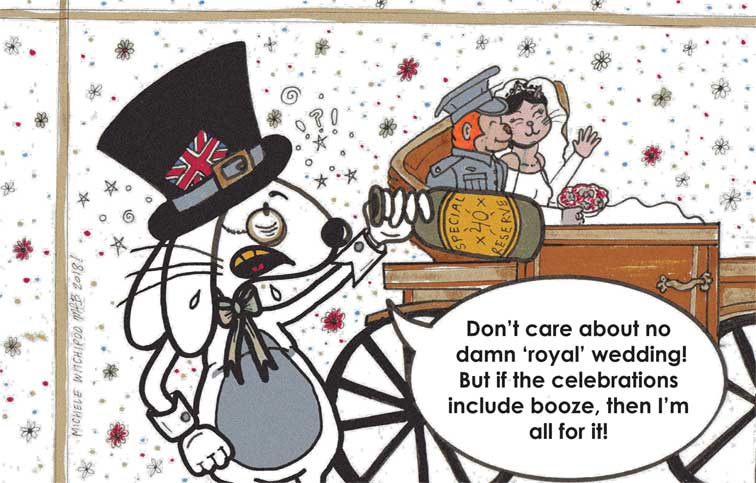 Psycho Bunny attends the Royal Wedding 2018. Based on the comic written and drawn by Michele Witchipoo, on WitchesBrewPress. May 2018.

Now for the social media shout-outs:

On Facebook there’s pages for Psycho Bunny and for Michele Witchipoo – WitchesBrewPress. On Twitter there’s my own account, and one for Psycho Bunny. World Ov Witchipoo is my Tumblr one. On Instagram there’s WitchipooArt. Got some cool stuff on RedBubble, including cute summer dresses featuring my designs, as I’ve mentioned before.