Afterwards by myself, I thought about Anais Nin, and then about relationships in general. There’s sex, and then there’s love. Every once in a while, the two mesh together. Love is a very tricky thing though. It comes in many forms.

There’s also something else. The heart is not a toy. Especially when it comes to women. If a woman loves you unconditionally, then consider that to be a gift. When a woman gives her heart, she is showing her vulnerability, her loyalty, her devotion . In cases like this, the cruelest thing to do is to break her heart. Many times heartbreak hurts more than actual physical pain.

“Love never dies a natural death. It dies because we don’t know how to replenish its source. It dies of blindness and errors and betrayals. It dies of illness and wounds; it dies of weariness, of witherings, of tarnishings.” – Anais Nin

Not all Anais Nin quotes are this melancholy. There’s some other quotes I favor over the one posted above, but this one rang true at the particular moment.

Anyway, here’s the sketch of week. 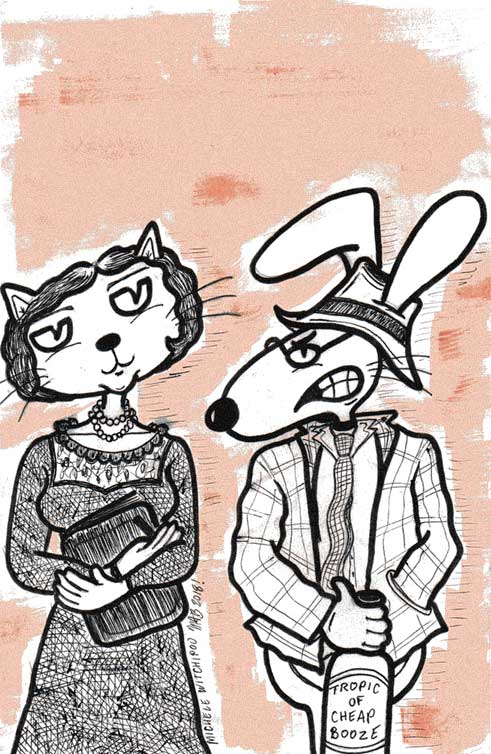 Anais Nin and Henry Miller. Based on the comic written and drawn by Michele Witchipoo on WitchesBrewPress. Feb. 2018.

Going through the original rollcall, you can like the two Facebook pages Psycho Bunny and Michele Witchipoo – WitchesBrewPress. There’s also Twitter for myself and for Psycho Bunny. Check out Instagram and Tumblr as well. More coming soon…

← Another Anatomical Heart
Waiting For Spring. Psycho Bunny Sketch of The Week 2/27/2018 →