A few days ago was Maha Shivaratri, or Shivaratri. It’s annual holiday honoring the Hindu god Shiva. The “great night of Shiva” is a lunar holiday, falling on the 13th or 14th during the winter season.

After a few days past 2018’s Shivaratri, I came across old artwork from 2003. Totally forgot about this sketch. It was done while passing time at a former job. I worked at some pseudo-spiritual gift, clothing and bookstore, located in the East Village. The shop was on East 6th street. At the time East 6th street was lined with small Indian restaurants. Inside the shop I was surrounded by deity statues from various pantheons. Now that year of 2003 was particularly significant. It was right before entering my Thelemic phase, which lasted a few years. 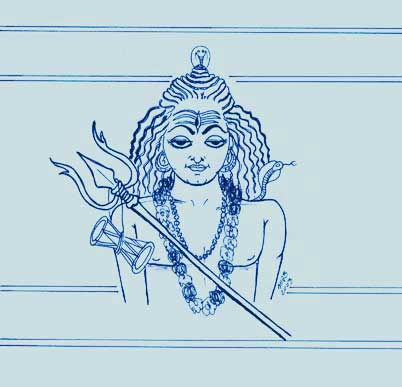 Maha Shivatri is very important to Shivaites, or those who practice Shavism. Within Hinduism, there’s a sect devoted to Shiva and his teachings.  The Shavites worship Shiva as a supreme god.