Yes, I know, I know. It’s been a while since posting the weekly Psycho Bunny sketch of the week. In fact, there was a whole bunch of sketches to be posted back from October or November, but life got very busy.

In 2016, my handmade holiday tree ornaments did very well. In 2017, despite purchasing large quantities of materials, only managed to make only a few. As stated previously, life got very busy. Didn’t have the time to create a whole new batch. Although I couldn’t make it to any craft fairs this past season, my friend offered to let me sell some of my ornaments in her new salon. The Steampunk Cthulhu design sold out for a second year in a row. As of this posting, there’s also no more handmade Bowie ornaments left. In a way, crafting is hard work, so I didn’t miss it too much. My focus has been more towards new projects, such as putting out new comics. 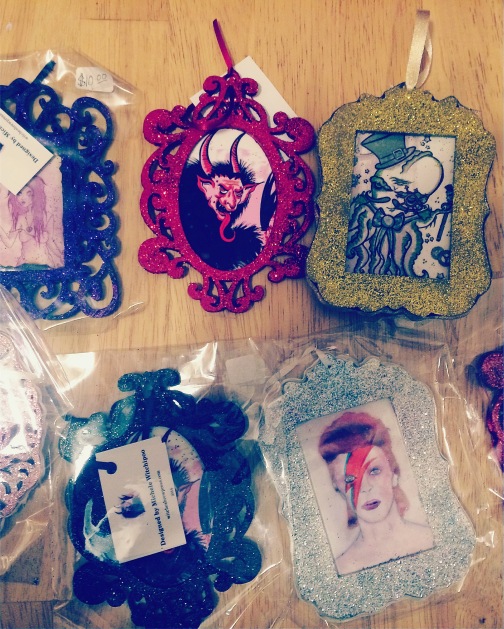 Yet I did manage to create my own Krampus door plaque, which hung outside my apartment door. Amazing what glue gun skills can do. 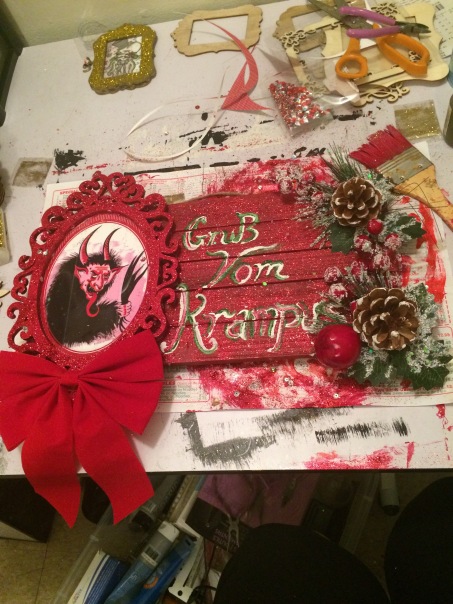 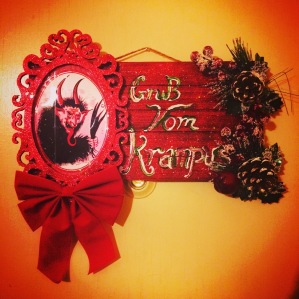 Alright, so I indulged a bit. The year 2017 was spent catching up on concerts. There was Adam Ant, Front 242, Gary Numan and finally, Television. Adam Ant was fun, but there was a slight disappointment. As he was performing, you could tell he was doing it for the money. Adam Ant blatantly rushed through the entire Kings of The Wild Frontier album, revealing his heart wasn’t into it. Even if he brought back having two drummers on stage, just like he had during his heyday. On the other end of the spectrum, Gary Numan was absolutely amazing. Just everything about that show was brilliant. It’s very obvious that Numan still loves what he does. His set was a mixture of both old and new songs.  Unsurprisingly, the crowd went crazy for the classics. The most well known album The Pleasure Principle was almost performed in its entirely. Even threw in a few Tubeway Army ditties. So Gary Numan was my favorite concert of 2017, followed by a tie of Front 242 and Television. It was my second time seeing Front 242 live. Guessing that my first time was way back in 1991. Television was a good way to end 2017. My friend pointed out that he thought Radiohead might’ve been influenced by Television. Afterwards out of curiosity, I binged on various Radiohead songs.

There was some upheaval in 2017, but it all worked out in the end. Finally got the luxury of having my own ‘art studio’. So I appointed my two cats as my “art assistants.” After some inspection, Netzach Wondercat wasn’t impressed. Meanwhile Squeaky Squeakums demanded an early lunch.

There were some Inktober sketches I never got around to posting, but it’s too late now. Moving forward, here’s a new Psycho Bunny sketch of the week. Everyone’s favorite alcoholic rabbit complaining as always. So don’t forget to click “like” for the two Facebook pages: Psycho Bunny and WitchesBrewPress. Also on Twitter under two accounts: MicheleWitchipo and MrPsychoBunny. On Instagram there’s WitchipooArt. There’s a few other social media accounts, but let’s just get to the quick sketch.

The Psycho Bunny sketch of the week for Jan. 8th, 2018. Based on the comic written and drawn by Michele Witchipoo, on WitchesBrewPress. Official FB page: https://www.facebook.com/PsychoBunnyComix/