Haven’t had a single second to post anything lately. Been going through many life transitions. Don’t worry, there’s plans to be back on here soon. I’m forming a “fake” band with my friend. It’ll be a two piece. Think of Shonen Knife meets They Might Be Giants meets Big Black. That’s our concept right now. Nothing in this band will make sense, nor does it have to. So stay tuned for details, like a band Facebook page, a website and a Soundcloud URL. We’re in the very beginning stages, so bare with us.

Last weekend I took part in the Women In Comics comic con over in the Bronx. It was a much needed break. There’s a comic book anthology I would like to start up, but again, that hasn’t been fleshed out yet. The band is coming up front and center. Finding myself looking at analog drum machines more than tending to other responsibilities. Priorities. 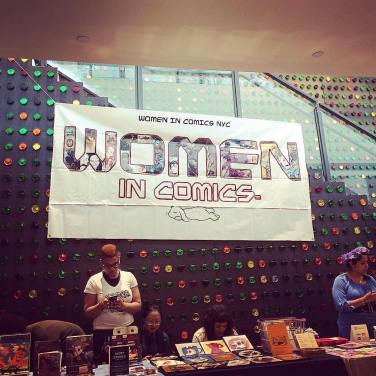 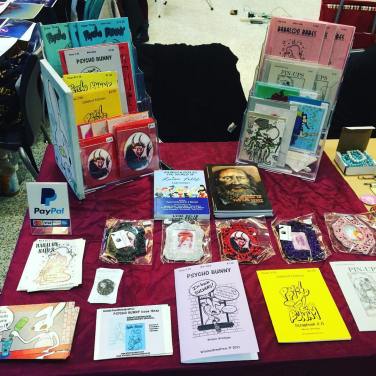 Speaking of comics, illustration and art. Going to sideline to a concept which always irked me. The artist’s statement. While I could understand statements themselves, there’s a part of me that wishes people have their own interpretations. Why wait for that the artist to explain? That’s probably the difference right there; the difference between the artist and the audience. One way to look at it. 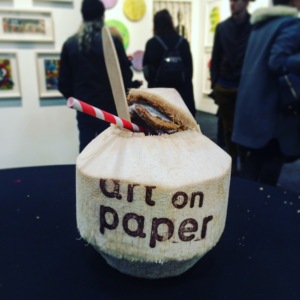 This diddy cost $14. Who said art was cheap? From Art On Paper during NY Art Week. Photo by Michele Witchipoo.

Recently also attended Art On Paper during NYC Art Week. Had a chance to go to Volta NY, but circumstances got in the way. That really irked me, but what could I do.

This dialogue from John Waters’ film Female Trouble best describes how I feel about the concept of “art” for the time being. Perhaps this should be used as my “artist’s statement.”

Dawn Davenport: [onstage] Thank you! I love you! Thank you! Thank you from the bottom of my black little heart! You came here for some excitement tonight and that’s just what you’re going to get! Take a good look at ME because I’m going to be on the front of every newspaper in this country tomorrow! You’re looking at crime personified AND DON’T YOU FORGET IT! I framed Leslie Bacon! I called the heroin hot line on Abby Hoffman! I bought the gun that Bremmer used to shoot Wallace! I had an affair with Juan Corona! I blew Richard Speck! And I’m so fuckin’ beautiful I can’t stand it myself! [She shoots her gun into the air] Now, everybody freeze! Who wants to be famous? Who wants to DIE for art?!

Audience member: I do!

Will be back soon with the weekly sketches and whatnot.