Occasionally I’ll send drawings to Sketch Lottery. Recently that site had a special anniversary edition, where you can draw any subject from the past character list. It gave me a chance to draw two of my favorite comic book characters, Buddy Bradley and Tank Girl.

The first one submitted was actually from my early childhood. Grover from Sesame Street. This time I threw in a Rockabilly twist. 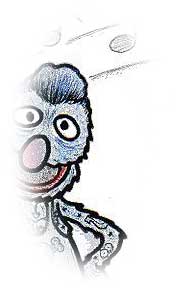 The second one was Buddy Bradley from Hate Magazine. Hate Magazine is a comic written and drawn by one of my top ten cartoonists, Peter Bagge. Buddy started as disgruntled member of a dysfunctional family. Later Buddy moved to Seattle getting caught up in the burgeoning late ’80s/early ’90s Grunge scene. Eventually Buddy moved back to his hometown in New Jersey where he more or less matured. After marrying his neurotic girlfriend Lisa, he settled down with a family while maintaining his own business. I took the ’90s Grunge Buddy, making him into a 2017 Hipster Buddy. The type that you can find in a Bushwick watering hole like The Cobra Club.

Number three was a show I watched on and off during the early 2000s. If you remember Aqua Teen Hunger Force, then you remember Meatwad. Did the show itself make any sense? Of course not, but maybe it wasn’t supposed to.

Here you can see the Aqua team on a vintage valentine design. Like the type you used to give to your classmates straight out of the box brought from the drug store. Sometimes I think that was more fun than the later adult valentines.

Last one up is Tank Girl. Back in the early ’90s, I was introduced to Tank Girl by my UK friend Jason. He took a chance and mailed me a copy. Too bad the movie version tanked, but that’s a different story. Still not as bad as 1995’s Judge Dredd. Where I sat in a theater as the entire audience heckled the film. Good times.

Personally I could’ve done a better job with this sketch. It was late but I was pushing myself to draw Tank Girl before the deadline. Will have to do another version if Sketch Lottery has another anniversary edition. 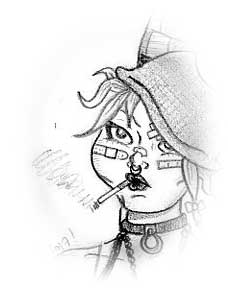