Not since the days of Pacman has a game have such impact. Apparently downloads of the Pokemon Go app has surpassed even Twitter.

I’m on the fence in regards to this game. On one hand it’s fun. On the other hand, it’s definitely Orwellian. The last thing we need is a soul sucking app. Another perceptive is that it’s making people get up, and get out of the house, despite the blistering summer heat. It’s a very physical game. A form of low-fi exercising, if you care about that sort of thing. As you look on your screen for a Pokemon to catch, you discover little tiny details about your surroundings. For example, in my own neighborhood, I wasn’t even aware about some fake owl attached to a building on my block. That fake owl just happens to be a Pokemon stop.

Is it privacy invading? Of course it is. It’s like every other tool in life. It’s how you use it that makes the difference. I wouldn’t worry about this game too much. This trend will probably burn itself out. By next summer, we will have already moved on to the next trend. At least it wasn’t that stupid ice bucket challenge from two summers ago.

I was extremely cynical about Pokemon Go at first. Blending fantasy with reality had curiosity getting the best of me. Of course, now that I’m excelling at this game, half the time the servers are down.

This game comes out at a crucial time in American history. So why are we allowing ourselves to be distracted by cute little pocket monsters?

Better than sitting in misery, I suppose. Yes, there’s the TTIP, the U.S. Presidential race, and every other tragedy that’s been happening since Bowie died ten days into 2016. Actually, it really started when Lemmy died a few days before New Year’s Eve. That was definitely a sign of things to come, then Prince sealed the deal. (Alan Vega died most recently). Look. We knew the world sucked already. For those who sit in their cruddy apartments alone bickering about how “I don’t follow pop culture, I have better things to do…” In response there’s two words: Sturgeon’s Law. Politics and religion cannot bring people together, but perhaps this game will. It all depends on your perceptive.

This video represents Summer 2016. Video by Daquan Wiltshire. I can relate, especially people used to get on my case for watching vintage cartoons.

Why would one want to live in a world of constant misery, being haunted by ghosts of your past for example, and trying to bring down everyone around you. Personally, I appreciate the little whimsical things in life.

Enough of this haphazard editorial. Here’s the Psycho Bunny pic of the week.Of course, don’t forget to order any comics from my website, or from my RedBubble shop, or my two Facebook pages, one for Psycho Bunny, and one for WitchesBrewPress.

Till next time folks. 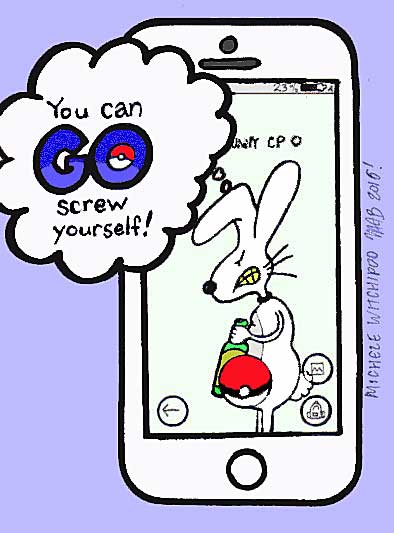