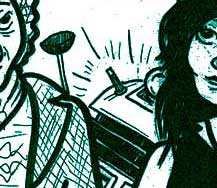 I have a particular fondness for the Fourth Doctor. Growing up during the early 1980s, I discovered Doctor Who by syndication. It was broadcast on a local NYC television station, WOR, which was channel nine on the dial. It’s Saturday early afternoon slot was right before wrestling.

For the hell of it, I’ll slap on this video:

For months watching Doctor Who became my weekend ritual, watching the Fourth Doctor and his companion Sarah Jane Smith on their various adventures. Not much was known back about Doctor Who. I didn’t know that Doctors regenerate, with companions that come and go. So when Sarah Jane left, I was heartbroken. Leela just wasn’t the same. Foolish, I know. Thus stories of Time Lords was eventually dropped along with those tacky wrestling matches that followed afterwards. Besides, music was taking over. It was the age of New Wave and ’80s Pop. Joan Jett, The Go-Go’s, and later Culture Club with Boy George captured my imagination. After all, I was only 13 years old.

Of course years later, Doctor Who finally broke out of PBS obscurity. If you follow pop culture, you probably know the rest. As they say, you never forget your first Doctor. While I’m fond of the Tenth Doctor, portrayed by David Tennant, my favorite still remains the Fourth, as defined by Tom Baker.

Anyway, check out my piece on Sketch Lottery, and of course, don’t forget to check out the other artists. I’ll leave you with another WOR station identification clip.