This past Saturday proved to be quite busy as predicted, but it was a good busy. This was despite foul-ups at the copy place and me fighting some kind of last minute sickness. Overcoming the lack of sleep, both the Big Apple Comic Con and the MF Gallery shows were successful. 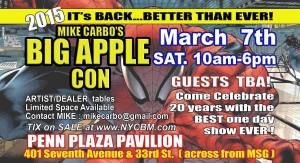 It had been a while since I had a table at Big Apple Comic Con. It was the tenth year anniversary of this local comic con. In 2009, Big Apple was acquired by Wizard Entertainment. Recently this con went back into the hands of the original organizers.  Hey, not to bad mouth anyone but personally I’m kinda glad Big Apple broke away from Wizard World.

So it everyone’s surprise, the Penn Plaza Pavilion, where Big Apple was being held was jammed packed solid. It seemed as if almost all the comicbook fans and cosplayers came out in full force. At one point, there was barely any room to walk in the pavilion. In fact, there was actually a line outside to enter the building. 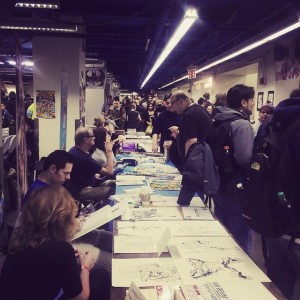 At Big Apple Comic Con, some cosplayers really had some impressive costumes. 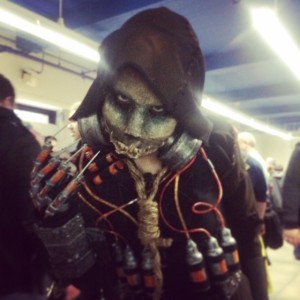 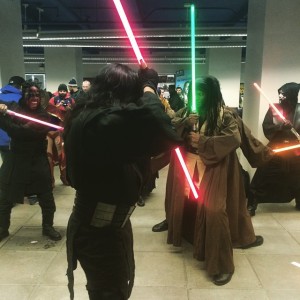 There were both established and indie/small press comic creators at Big Apple. One of the highlights was Ramona Fradon, best known for drawing the Brenda Starr newspaper strip. Ramona Fradon also did the art for various other companies, including DC Comics, working on characters such as Aquaman.

Other artists included Bob Camp, Mark Bode, Bill Plympton, and Ken Knudtsen, who did the comic ‘My Monkey’s Name Is Jennifer.’

Of course, I had my own self-published comics to sell. For the occasion, I had two new mini-issues available. One was a sketch simply titled ‘Pin-Ups.’ The other was a limited edition Psycho Bunny mini-issue, #3.50. The Pin-Up mini-issue will be available in my Etsy store soon. 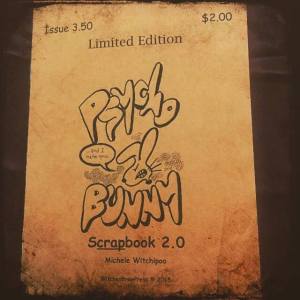 My friend Louisa, art model extraordinaire, was kind enough to take photos of me at my table.

Big Apple is also known for celebrity appearances. Wrestler Roddy Piper was there, along with two of the Power Rangers. (Red and Green if you must know) This time I met Johnny Brennan, one half of the prank call team The Jerky Boys. Back in the early to mid ’90s, I quoted The Jerky Boys constantly. My friend gave me a cassette of their first release, which is a comedy classic. Nowadays Johnny Brennan does the voice of Mort from the animated television show Family Guy. I approached the table to tell Brennan what a fan I was. To my surprise, he gave me a free autograph. Brennan turned out to be a sincerely nice man.

Autograph of Johnny Brennan, of The Jerky Boys and voice actor of Mort from Family Guy. Signed Sat. March 7th, 2015.

After Big Apple Comic Con, it was off to Brooklyn for MF Gallery. I was honored to be a part of this show, which was held in honor of Women’s Day. The exhibit was titled ‘GIRLS of The Underground.’ The opening party showcased all the amazing work by a variety of artists.

Flyer for Girls of The Underground at MF Gallery. March 7th, 2015.

The illustration I submitted was originally drawn for Valentine’s Day. 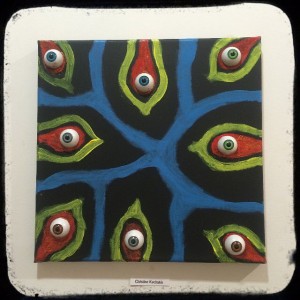 Crowd at the MF Gallery art opening for “GIRLS of The Underground.” Sat. March 7th, 2015.

In closing, I’d like to thank both Big Apple Comic Con and MF Gallery for having me be a part of the successful events.