File under: When the PC warriors get ridiculous.

First the internet millennial ‘feminists’ attack accomplished artist Milo Manara over his Spider-Man cover earlier this summer. Now it’s most likely the same group of internet millennial ‘feminists’ who are attacking a man known as Dr. Matt Taylor. Dr. Taylor just happened to do something really amazing with a project called the Rosetta Mission. In short, he helped put a probe on a comet in space, traveling at 35,000 mph.

Yet on a day which should have been the happiest of not only his career, but his entire life, was unfortunately ruined by people proclaiming that the shirt he wore to his conference was too “offensive.” Nearly undercutting all his hard work and accomplishments. Over a shirt with which had a sexy women pattern. 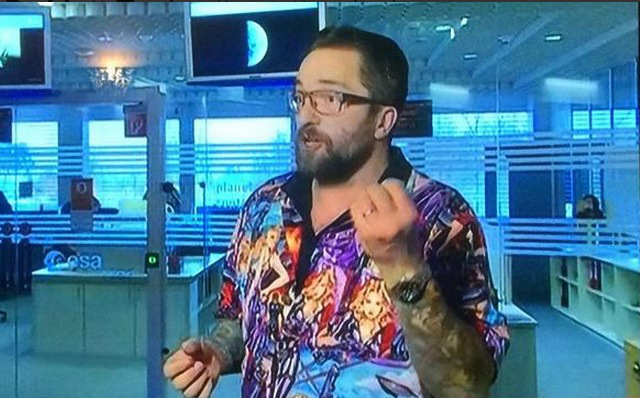 Let this sink in for a moment.

It is exactly this kind of attitude that gives these ‘feminists’ a very bad reputation. Just another excuse for men who hate feminists chime in their ignorant opinions. In addition, this sort of attitude these internet millennial feminists have is totally disrespectful to all the first and second wave of REAL feminists. Personally, I’m much more concerned with equal pay, rape laws, sexual harassment, LGBT politics, a women’s right to chose, etc., than to focus on a bowling style shirt with pinups.

I fail to see the hoopla over the shirt in question. What is so offensive about it? It’s just space girls. Not even pornographic. Looks like artwork from an early ’80s Heavy Metal issue. BTW, did you know that the shirt was given to him by Elly Prizeman, a woman?

If you ever read Margaret Atwood’s book ‘The Handmaid’s Tale’, she warns us about this. In the story, it was exactly the crazy pseudo-‘feminists’ that inadvertently gave power to the totalitarian conservative takeover of America. Which led to women being forced to be either a concubine, a frigid officer’s wife, a prostitute in secret military brothels, or to sent to the camps to be worked to death. The country becomes a bleak, fundamentalist, rigid society. So next time you get all worked up over what someone wore, think about your rights to express yourself as a human being. Censorship only leads to a completely repressed society. Do you really want the right to express yourself taken away?

We should be concerned with actions. Not what over someone wore.

The only attention we should be giving him is on his work, not his wardrobe.

If these internet politically correct warriors need a Twitter punching bag, may I suggest Eminem? The rapper has made a whole career based on misogynistic imagery through his lyrics. Afterwards, they can help raise awareness about forced female genital mutilation. But no, that will never do. That’ll be too much work.

In addition, there were two women on on the Rosetta project. Kathrin Altwegg and Claudia Alexander. Altwegg alone did 23 publications relating to this Rosetta mission. This should encourage young girls to be interested in science and technology. Instead, we have these know-it-all internet bloggers go on and go about “that shirt.” Thus diverting the attention away from the accomplishments of Altwegg and Alexander. Thanks. What a way to show gratitude to brilliant, talented women actually working in the science field.

On a more positive note. If Dr. Taylor had not worn that particular shirt, perhaps all the scrutiny wouldn’t have brought to light about this Rosetta Mission. It sure beats having to hear about Ebola paranoia or Kim Kardashian’s ass. It’s definitely more uplifting than the low voter turnout in the most recent midterm US elections.

Looking at his photographs, clearly this is a man who loves working in his field. His tattoos reflect this. He’s not at all concerned with scientific stereotypes. Considering what he’s managed to achieve, let’s cut him some slack.

That’s what life is supposed to be about. You’re supposed to live it, and enjoy the best way you can. And with that, Dr. Matt Taylor has become a new hero of mine (along with Kathrin Altwegg and Claudia Alexander.) You wear that shirt Dr. Taylor, and you wear it with pride. 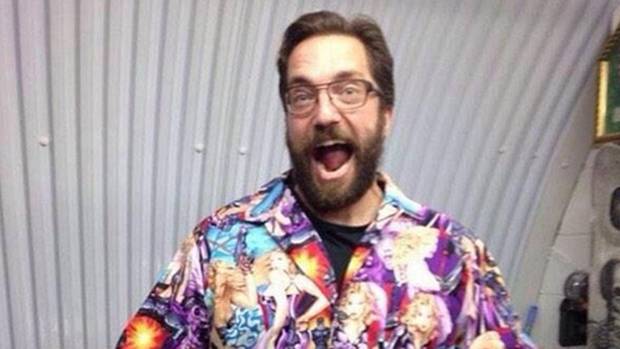 7 comments for “In Defense of Dr. Matt Taylor (An Editorial)”