My contribution to last week’s Sketch Lottery, and keeping up with the Inktober theme. This time, the subject was Salvador Dali. I always thought of him as an original rock star. (Although the pic here looks a bit like Alan Moore) Which is probably why I drew him in that style. 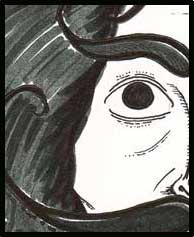 Just for the hell of it, I’m gonna throw in a song from 1984. Dali’s Car, a side project between Bauhaus‘ lead vocalist Peter Murphy, and Mick Karn from the band Japan. In keeping with the Dali theme.

← Inktober – Where The Wild Things Are
Exchange Rates Show This Week →