I like keeping sketchbooks around. My preference are the compact mini sized ones. Usually cause they’re easier to carry. Also like them cause many of them have nice front covers. One tiny blank sketchbook I found in Jackson Heights, Queens in 2008 had Indian fabric covering the book.

Now I don’t go through sketchbooks like some of my peers. The regular artist blank sketchbooks I tend to go through rather quickly, but the fancy mini ones takes years to complete. A personalized mini sketchbook full of your art also makes a nice gift for a loved one. I did once or twice. As for my own fancy mini sketchbooks, still working on one or two towards completion.

Typically I’ll go with a medium theme. One fancy cover mini sketchbook had nothing but colored pencil artwork. Another one was just of drawings done with Copic markers. As I was going through photographs to delete on my iPad, I came across some done last year in my mixed medium mini book. Done last summer, these are a few pics I’m posting.

I’m not a huge Superman fan per say. Just did this sketch more or less out of nostalgia. When I was a small child, the films with Christopher Reeves were huge. My father took me to see Superman One and Two. Later on caught the disastrous sequel starring Reeves with Richard Pyror. That’s when this 80’s franchise “jumped the shark.”

Found a DC graphic novel and challenged myself to do this famous DC character. Sketch by Michele Witchipoo. Summer 2013. 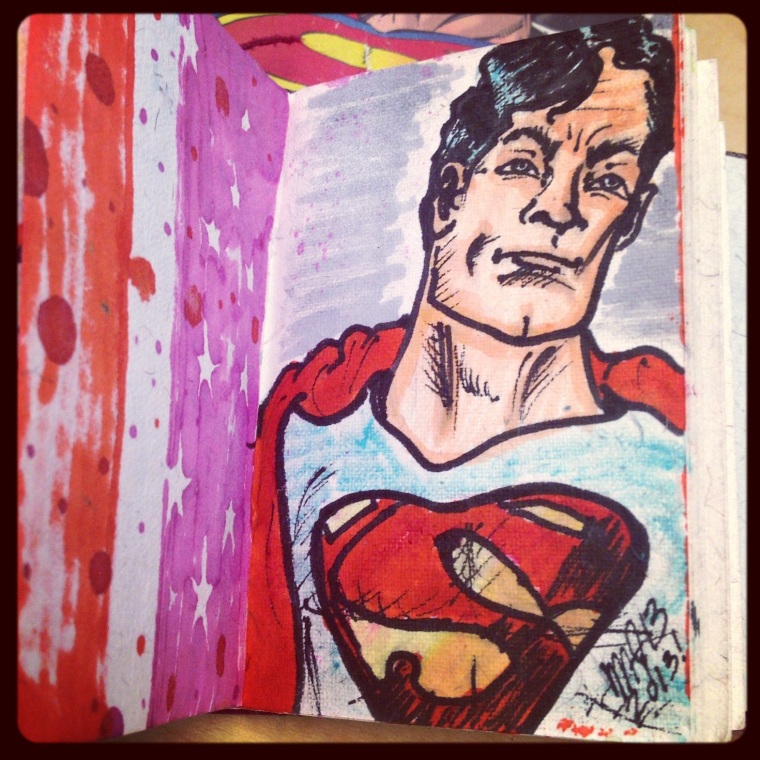 Grant Morrison once compared the Superman character to a Greek mythology figure within a magickal element. I forgot what his comparison was exactly. Anyone into esoterica won’t find it hard to see the correspondence. Funny how I’m mentioning this, as I haven’t read anything Morrison’s done in a while.

Next is my rendition of Vaughn Bode’s Cheech Wizard character. I didn’t recognize the influence Bode had on me until years later. When I did Superman, it was more of a challenge. With Cheech Wizard, this one was more fun re-creating. I just remember graffiti artists being really taken in with Bode’s work, and his son Mark has carried his father’s torch.

Do you know this character? Of course not. Because I created her. It started off when I was really into learning about different mythological goddess. Since I hate summer, she was created. This goddess will give you solace just as long as you pay your electric bill. In reality, the modern air conditioner was invented by Willis Carrier, but hey. Work with me here.

Okay, back to my sketchbook. Last one is Louise, one of the breakout characters from my current favorite show “Bob’s Burgers.” I love Louise. I can relate to her older sister Tina a bit, but I really feel I’m more of Louise. Bob’s Burgers is one of the very few television shows I’ll watch nowadays. I gladly canceled cable, but I try to catch up on the current episodes via Internet.

That’s it for now. Until next time.