Labor day weekend 2013, we decided to check out Gotham City Lounge. The bar was actually recommended to me over a year ago by a fellow Ridgewood neighbor. Since Ridgewood is next door to Bushwick, why not check it out? 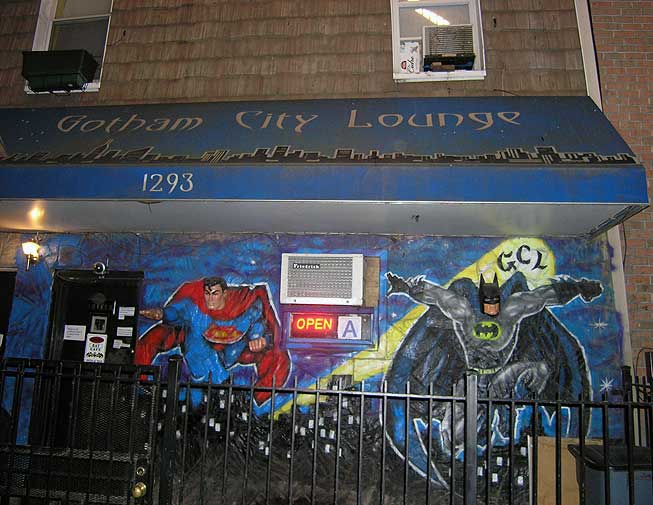 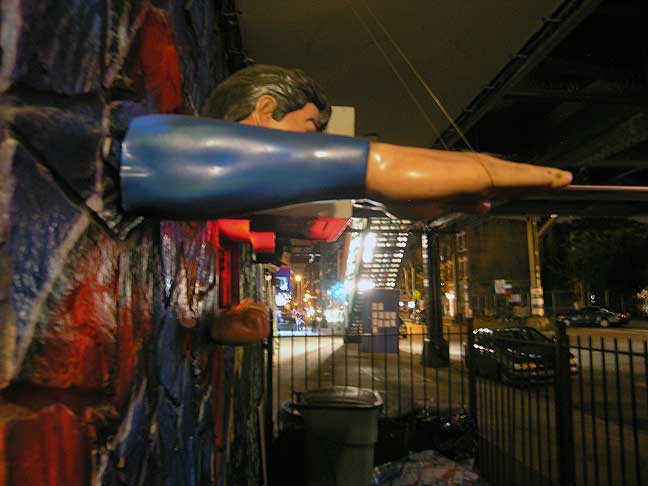 Located right underneath the M subway line, Gotham City Lounge is a dive bar for all things superhero. When I say dive bar, I mean it as the highest compliment. Greeting us were the DC characters Superman and Batman.

Before allowed access, we had to ring the buzzer. I think this was due to more Bushwick being formerly known as a rough part of Brooklyn rather than a secret superhero hideout, but it can work either way.

Inside both the patrons and the bartender were really super friendly and nice. The bar’s clientele consisted of long time Bushwick locals, neighborhood artists to various hipsters moving into the area. Surrounded by collectable figures and original comicbook art, I ordered a suggested Dr. Freeze cocktail while Ben had a Red Bull. The drink menu was definitely heroic.  Prices ranged from three bucks for a PBR to eight bucks for a comic book themed booze. Most of the drinks were five dollars.

At the bar we had a conversation with a female geek, who certainly knew her stuff. we discussed the upcoming New York Comic Con, and Harry Potter. Ben chatted with her about more of the superhero characters. I had to bow out of this one, since I was raised on more of stuff like Fantagraphic Books. A guy approached Ben cause he nailed the source of where one of the framed original comicbook page was from.

I took a few photos, but right before doing this blog post, I discovered this YouTube clip. I think it explains Gotham City Lounge much more better than I ever could.

If you’re in NYC, and want to check out this place for yourself, the address is 1293 Myrtle Ave, Brooklyn, NY 11221. Just take the M subway line to Central Avenue. The lounge is just right underneath the train station. The perfect place after attending this year’s New York Comic Con.

1 comment for “Gotham City Lounge – A Bar For Bushwick Superheroes.”