I walk around in the summertime saying “How about this heat?” – Dennis Leary

Around 2003 I came up with the idea of having a goddess for air conditioning. The character Goddess of The Air Conditioner was born.

She’s more of a seasonal character per say. I kinda wait until the heat is blistering. She’s not that hard to please. Offerings come in paying your electric bill. Central air is even better. 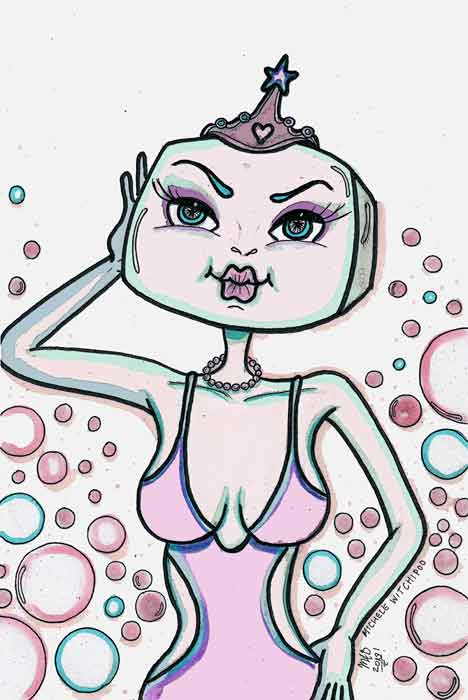 The Goddess of The Air Conditioner. Character design and drawing by Michele Witchipoo. July 2013.

She’s usually dressed in very girly colors. A pink kinda gal. At the time when I created her, Paris Hilton was constantly in the news. So in a way, these drawings were a piss take on the whole Paris Hilton image. Nowadays I just channel whatever bottle blond is “hot” at the moment. Rest assured though that this Goddess will always have class. I could see this Goddess having a haute couture wardrobe. She just doesn’t wear bathing suits you know. In her closet she wears Vivianne Westwood heels during the day, and crystal encrusted Christian Louboutins at night. She accessorizes with her cute little custom diamond tiaras along with Betsey Johnson and Alexander McQueen. When she feels like it she’ll do Versace and Gaultier. She appreciates the classics like Channel. She’s on the fence about John Galliano. Not a fur gal however. She considers furs rather tacky.

Yet despite her killer closet, she loves each and everyone of her devotees. Regardless of clothing labels or knock-offs.

You’ll find the Goddess of The Air Conditioning in such places like your local supermarket, the downtown movie theater, and Dunkin Donuts. While she sips her Cristal Brute 1990 Methuselah, she comforts those who suffer through work, school, or Facebook trolling. Just as long as you pay the electricity bill, darling, you’ll be fine.

Strangely enough, I never put the Goddess of The Air Conditioner to print. Been meaning to put her in a Psycho Bunny but it never happened. Perhaps one day. Meanwhile, here’s an unpublished panel from 2004. From the early days.

An unpublished Goddess of The Air Conditioner panel from 2004. It’s so hot, you can barely keep your tighty whities on. Drawn by Michele Witchipoo. Pen and marker.

May the Goddess bless you. Just as long as you pay your electricity bill.