Some things you can always count on living in NYC. There’s bound at least one of these on your block: a bodega, Chinese takeout, a laundromat, or corner deli. On every other block you’ll spot a pizzeria, either a Dunkin Donuts or Starbucks, a liquor store, a bar or Optimo newsstand. Actually there’s less pizzerias now. They’re slowly being replaced by 7-11s, but that depends on where you live. Then there’s your typical 99 cents store.

I’m going to talk about the 99 cent stores. They’ve been popping around more since 1990. In fact, these stores are nationwide. With the economy in the tanker, they’re not going anywhere anytime soon. They’re just one step up from your local thrift store, only the merchandise is new.

True, most of the stuff sold is mostly useless junk. The other mishap is getting the kind of crap that breaks after using them for two seconds. It’s useful for getting a roll of toilet paper for 69 cents. Sometimes you’ll be surprised what you’ll find.

Upon my discoveries when picking up a nameless brand of kitchen wipes, I stumbled upon these little ditties. And I’m not talking about the bootleg merchandise from China, with all their misspelled words and awkward use of English grammar. Just remember; all you need is just a few bucks plus a twisted sense of humor. 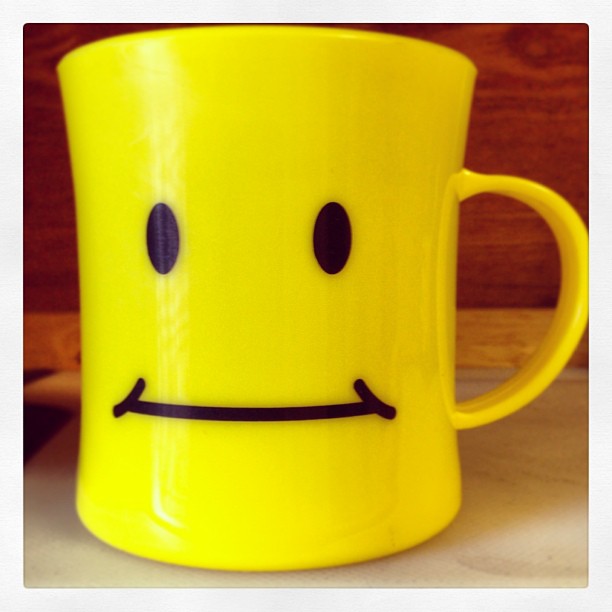 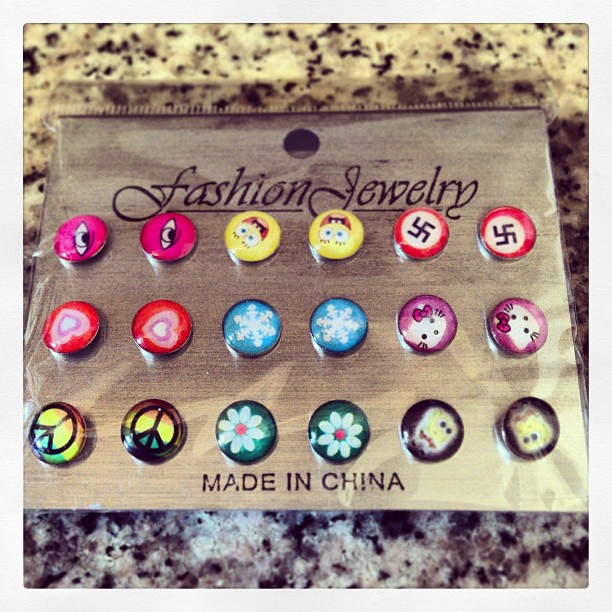 The above photo is interesting. Again I went in just to get some paper goods. Then I saw this earring pack. Among the designs of peace, love, flowers, snowflakes, bootleg Hello Kitty and SpongeBob was the swastika. Not the original Buddhist or Hindu origin, but the Nazi kind. So I brought this up to the counter and asked the cashier about this. Apparently she had never heard of the word Nazi, nevermind knowing what it means. She asked me to explain. As I tried to give a brief history lesson, the expression on the woman’s face looked puzzled. Yeah, it was going to get complicated. I just simply took the yellow post it note she gave me, and wrote the word down so she could Google it later. A week later in that same store, this earring pack was nowhere to be found.

Fake embroidery anyone? Chintzy cat coaster found in a 99 cents store. May 2013. Photo by Michele Witchipoo.

Now that cats are getting their doggy revenge through the internet, it’s only right that the 99 cent follow suit. Found these in yet another shop in Queens. Amazing what you stumble upon while buying no name cleaning supplies.

Art classes have jumped on the 99 cents bandwagon. Since I’ve gone back, two of my art classes have incorporated the 99 cents theme. One was from my sculpture class. We had to take something from a 99 cents store and twist it to a piece of post-modern art. I was assigned the task of remodeling a pasta strainer. The other class fared much better. In my InDesign course we had to go into a 99 cents store, buy a product with horrible packaging, and rebrand the item with a better look. I chose a box of alphabet shortbread cookies, and replaced it with a neo-retro design. It was okay. Looking back I could’ve eased up on the shadowing. Realize now that only the actual cookie product, which I scanned myself and re-arranged needed shadows but not anything else. Overall I received an A for my InDesign class. 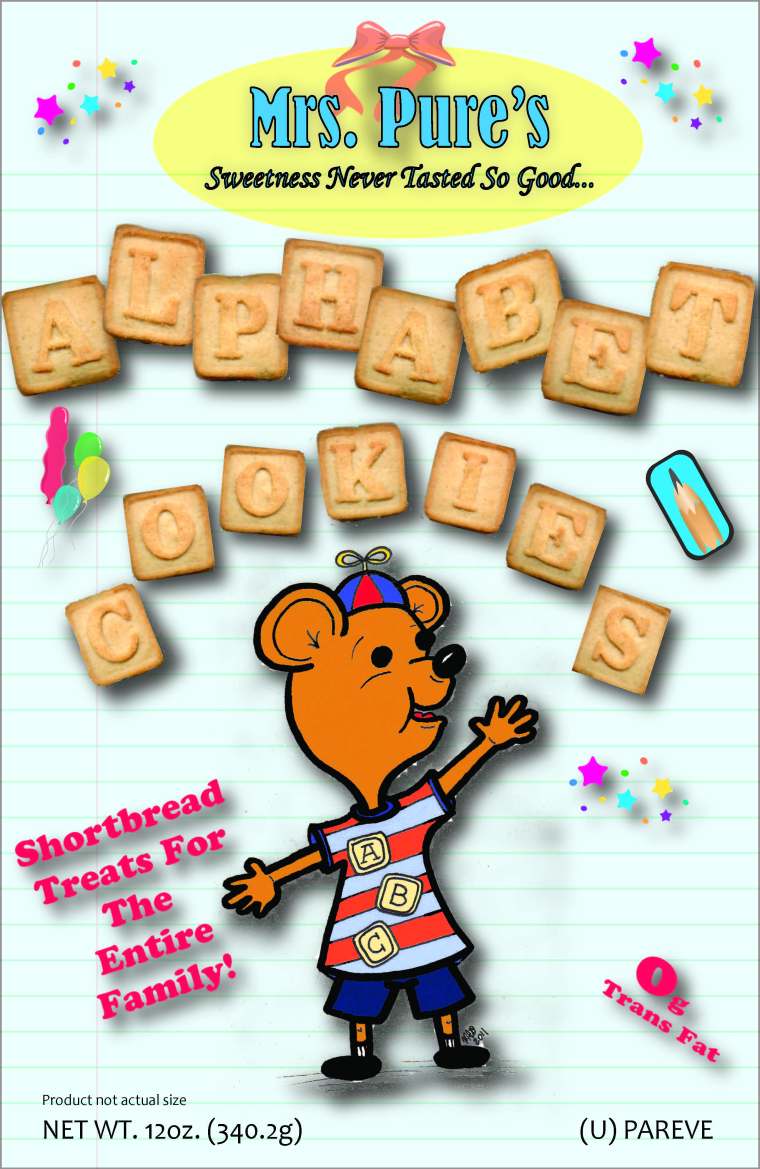 Rebranding of a 99 cents cookie box. Fall 2011. Cartoon and design by Michele Witchipoo.

You would think items brought from a 99 cents store would have a limited shelf life. On the contrary. I’ve had this zebra stripped picture frame for over ten years. The photo cost more to print than to frame. This one is dated from 2000 with my dearly departed black cat Tabitha. 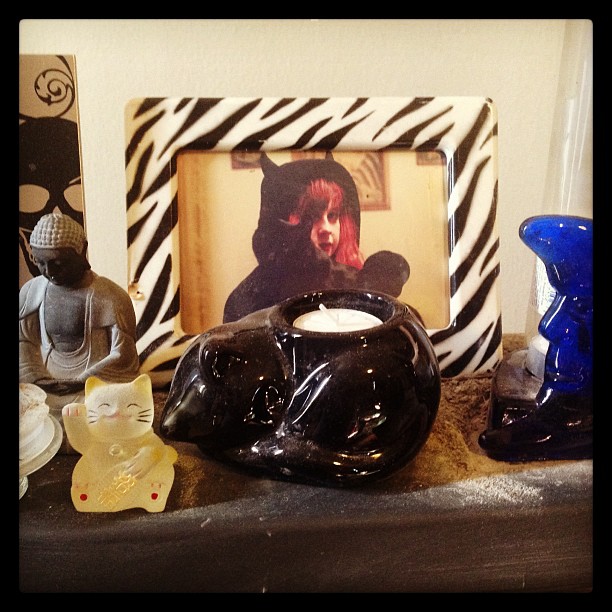 Zebra photo frame. A 99 cents find from over ten years ago. That’s me from 2000 with my cat Tabitha. (She passed away in early 2008). Photo by Michele Witchipoo.

These 99 cents stores are great for low budget holiday decor. Last example of this blog is of another frame found Halloween 2010. In keeping up with the theme of all things witchy. I used this frame to display one of my business cards at the last comic con I did.

BTW…I hope you don’t think my apartment is decorated completely with 99 cent finds. C’mon. I’m not that tacky.

← Kickstarter For St. David’s Day Festival-National Day of Wales 2014
This Saturday – Welcome To My Nightmare VIII →