Monday night was the “Art Takes Times Square” event. I had almost forgotten about it. Originally I wasn’t planning on attending, but then I figured, why not. It was only a short subway ride to Times Square. Figured I would snap a few pics and head back home.

It wasn’t hard to find the crowd. My rough guess about the crowd itself, it mostly consisted of artists who had participated in the contest. Then again, it’s not often that your artwork gets displayed on a 9×12 digital billboard in the middle of Times Square. Even if it was only for a minute. Still, it was joyous, as a marching band played during the festivities.

I made it to 42nd just in time to catch my image broadcast on the screen, maybe around 10pm-ish. 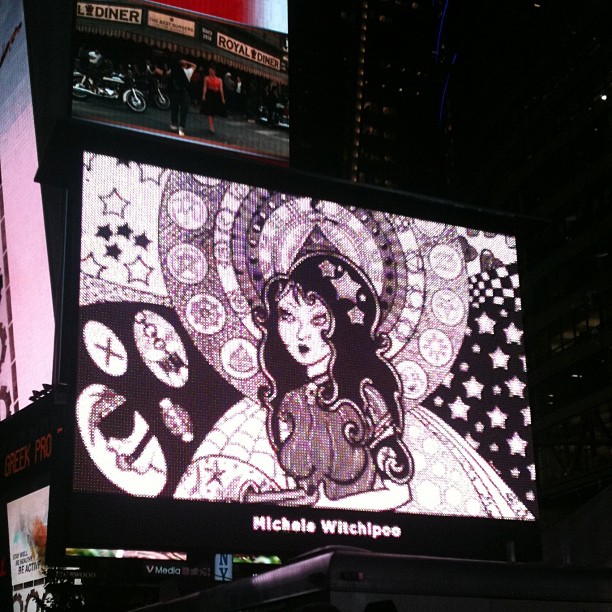 My illustration on a 9 x 12 digital billboard in the middle of Times Square. Art Takes Times Square event, Monday June 18th, 2012. The illustration was originally created and finished December 2010. Illustration and photo by Michele Witchipoo.

Then there was the after party. Okay, I was curious. Since I was one of the many artists who had their work shown, again I figured, why not.

Usually I don’t go to mainstream clubs or parties. I don’t even hang out that much anymore, to be honest. Back when I was into being social, my choice would usually be places found on the Lower East Side of Manhattan. Either dive bars or small underground clubs playing more ‘Alternative’ music like post-Punk, Goth, retro 80’s New Wave, Industrial, etc. Sometimes Metal or basic Rock n’ Roll. Occasionally I would go to drag queen parties, which would sometimes be mixed with the whole downtown ‘Alternative’ scene, or fetish events. Back in the ’90s, I went to some Raves and Rave-type clubs, but again, it was part of the whole ‘Alternative’ culture. This was back during the ’90s and early 2000s’. But as for more ‘mainstream’ clubbing, I rarely did such thing.

I got to see what I was missing at the Art Takes Times Square after party. Which wasn’t much. Don’t get me wrong, I had a good time, but it felt a cross between Studio 54 and Zoolander. Well, Maybe the Tunnel mixed with Zoolander. Certainly reminded me of an early Love and Rockets comic, particularly a few panels in a Palomar story (if you don’t know what I’m talking about with the Love and Rockets comics, don’t worry.) Either way, take your pick. My favorite part was that some of the party people dressed up in costumes. It’s an aspect of clubbing that I miss very much, sort of like the old ‘Club Kid’ scene. Then again, it’s probably not fair to continue comparing today’s parties with the club events from my youth. It’s a different time after all.

You could tell that at this after party, there were people who had never been to a NYC nightclub before, and it showed. So it felt like a high school dance, only with an open bar. At least there was good wine being served. The DJ sporting fashionable bunny ears played a variety of musical genres, mostly tried and true classics. Hip-Hop, 80s Pop, Current top-40, Michael Jackson, AC/DC and Nirvana. You know, typical stuff you play for a catered wedding party. Actually, now when I think of it, it did feel like a catered wedding event, only minus the food. After a while, my cynicism dropped down a bit. Observing the other guests, you could easily tell who wanted to be creative with their outfits, which I appreciated, and who just wanted to strut like a peacock on the dance floor, striving for attention. About 90% of the crowd was truly enjoying themselves with this outdoor party. It was a perfect night for dancing too, as the mid-June weather was just right.

The angel and the devil meet. The devil says “is it hot in here, or is it me?” In which the angel replies, “is it a sin to wear glittery Speedos?” Monday night, Art Takes Times Square after party. June 18th, 2012. Photo by Michele Witchipoo.

As I’m pretty much free-writing this blog entry, I realize just how cynical I have become. Wow. It is due to age? Well, I’m not that old. Not yet anyway. At the same time, I thought about something I haven’t even recalled in aeons. Like when I went to Danceteria for the first time. I was maybe 15 or 16, and had no business being there. Thanks to my caked-on Siouxsie Sioux wanna-be makeup, I made it past security who assumed I was older than I actually was and never even asked for my ID.  I wasn’t a regular Danceteria patron, but I was friends with another under-aged classmate, who went every weekend. It was this same classmate who took me to my first club that had an ‘Alternative’ scene. Once I stepped inside the building, I explored the many floors Danceteria had to offer. It wasn’t long before I got swept up in the whole underground environment. I loved every minute of it.

I even snagged one of my first ever boyfriends inside that club. It was after a Public Image Limited show at the Beacon theater. Some people wanted to head down to Danceteria afterwards to chill out, and I followed. As I sat in the club’s video lounge, some skinny dude with a small mohawk sat next to me. He inquired if “I had ever gone out with a punk rocker before?” And of course, he wasn’t of legal age either.

My days at Danceteria lasted as long as that one week high school boyfriend. Danceteria shuttered its doors, and then the Jennifer Levin case happened. Afterwards, the NYC clubs cracked down, asking to see your ID.

Back to the present and my current jaded self. Isn’t lovely to be an adult? I speak with jest, but in all, the party wasn’t bad. Seriously, I’m not a hater as I’m making myself out to be. After all, clubbing is a bit like going to church every Sunday. Nightlife survives not only on music, dancing, and fashion – people need to connect with one another. Deep down inside, very few people desire to be alone.

Being my usual cynical self at the Art Takes Times Square after party. Monday June 18th, 2012.

The after party was showing the same images that was just displayed in Times Square hours earlier. Alright, I thought to myself, and so I patiently waited to snap another photo. By the time my art and name rolled around, open bar had ended, the crowd dwindled, and a few peeps here and there started getting douche-y. My illustration pops up. Just as I snapped the pic, some big-headed jerk gets in my shot. Then I heard the first few notes of The Cure’s “Boys Don’t Cry” – a band that I am now permanently sick of since 1990 – and I was out of there.

As soon as I went past the ropes, the bouncers politely bid me farewell. Which was actually nice for a change; ’cause I do have to say, the security was surprisingly mellow. I bumped into a friend, who had just come out from work. We chatted for a bit inside another bar, which played the same Rhianna song I’d only heard earlier at the after party. Times have certainly changed, but it’s not every day you get to see your art displayed in Times Square. So yeah, that was the nicest part of them all.

2 comments for “A Night Of Art Takes Times Square”