In a moment of physical exhaustion and morbid curiosity, I tuned into the hit reality tv show “Jersey Shore.”

Yeah, yeah, should’ve known better. After viewing, I was so disgusted. Felt as if I had to take a shower. Instead of calling the program “Jersey Shore” a better title could have been “Jersey Skanks.”

I spent a good part of my teens actually avoiding ‘Guidos.’ You see back then, ‘Guidos’ had little tolerance for anyone who wasn’t like them, especially ‘freaks.’ I fell into the ‘freak’ category. Among some of my fond memories is having Guidos throw fireworks at me from across the street. It was because my hair was blue.

Granted that was back in the 1980s. In the year of 2010, perhaps my unexpected revenge is having the rest of America view these ignorant trolls for what they really are.

Still can’t believe these idiots have their own reality television show. Supposedly the cast is commanding $10,000 per episode, maybe even more. Really? Really. Illiteracy never looked this good. Who would’ve thought.

One of the main stars from this reality disaster is Nicole “Snooki” Polizzi. Polizzi was arrested this past weekend. Something about “disorderly conduct.”

The rest of the Jersey Shore crew isn’t too hot either. The guys are douchebags with a capital D. Meanwhile, the other girls prove feminism is officially dead.

And of course who would be partying with them, but Shitty Mickey himself. Here’s what actually happened: 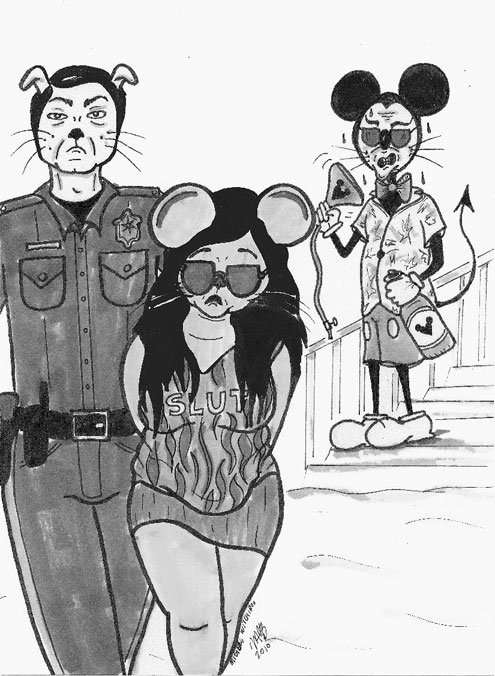 Next stop for Snooki: “Celebrity Rehab.”

← Shitty Shakespeare
Wait Until Your Father Gets Home →