A few years back, I tried to create my own religion of sorts. Perhaps maybe, I could make a few bucks, just like every other cult leader in America. It was a faith called Bubblism, based on the teachings of Mr. Bubble. Originally I had started the concept back in 1991. It barely left the starting gate when someone charged Mr. Bubble of covert misogyny. Why? Apparently his bubble bath was known to give women yeast infections. Mr. Bubble has vehemently denied these charges. Despite the heresy, accusations of vaginal irritation still continue to mount. Some blame the Sodium Laureth Sulfate, others blame Disodium Laureth Sulfosuccinate, Quaternium or simply the fragrance.

In 2007, Bubblism tried again. This time its plan was to convert new members through its MySpace page. A creed was planned to maximize this effect, with the planned release of “The Bubblism Manifesto.” A call to all filthy humans wishing to cleanse of all impurities and is willing to part with thee dirty money. Dirty people looking to join yet another movement.

Once again, both of these efforts failed to even reach the starting gate. The reason? Some genius forgot the password to both the Bubblism MySpace and email accounts.

One of the most sacred of Bubblism deities is The Goddess of The Air Conditioner. You can say the Goddess of The Air Conditioner is sort of like a mod con Kwan Yin. Divine air filters through this Goddess. Not many people know about her, but I was privy to her existence. She provides mercy upon those who need comfort from the blistering heat of the day. She provides comfort to those who need to sleep with cool air at night. She can often be found in supermarkets, or movie theaters. She can understand the need of viewing yet another dire mainstream film for the sake of coolness.

Not much is required in offerings. She would just prefer it if your unit was energy efficient and pay your electric bill on time.

To give you an ideal of what she looks like, here’s an image: 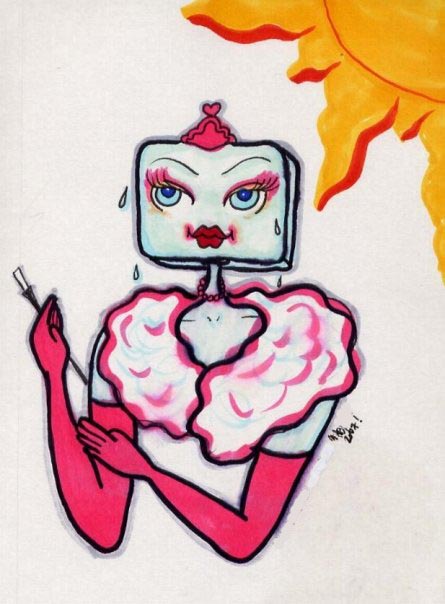 The Goddess of The Air Conditioner. 2007

All Hail The Goddess of The Air Conditioner!

← Go Wild In The Jungle
Poster Three For Tales Of Woe →

1 comment for “Cult Ov Bubblism/Goddess Of The Air Conditioner”