This past weekend I was interviewed for a local radio program. The show was titled The Phoenix Perspective, broadcast on WVOX.com based in the Westchester area of New York.

I decided to head into the Metro North area early to avoid rushing. The result was arriving into Larchmont a wee bit too early. Since there was some time to kill, I walked around town a bit. Came across this upscale child clothing store.

A step closer to the store window and there was live chickens being used as a store window display. A local woman strolling around with her grandchildren also gathered around. As the woman was about to point out the chickens to her other female friend, one of the birds turned around and pooped in fill view of everyone.

Chickens used as a window display, May 2010 in Westchester, NY

“So that’s what downtown Larchmont has become” replied the woman, “chickens shitting in windows.” With that being said, Grandma and crew walked away slurping on their ice creams cones.

Chicken in store window display, May 2010

As I took a few more pics of these chickens with my cellphone camera, couldn’t help but notice something. One of these chickens had dirt trapped within its wings. So if this one bird has crud smeared in its feathers, imagine other poultry on a commercial mass production farm.

Soon it was time to head to the radio station. After again arriving ridiculously early, I met up with the radio host herself, Phoenix, her friend Jaye and radio announcer Chuck. Before going on the air, me Phoenix and Jaye sat around consuming Entenmann donuts and coffee. Jaye took some pre-show pics, which you can see here. As for me, I was still nervous about being interviewed live on air. I’ve done interviews before, but usually it would be for some podcast which I would never hear afterwards. Out of sight, out of mind I suppose.

The interview itself went pretty smooth. Me and Phoenix chatted about my two self-published titles, Psycho Bunny and Babalon Babes. Also plugged this book I did about five illustrations for, Tales of Woe. If all goes well, Tales of Woe should be released sometime this summer. Pre-sales for the book are now up on Barnes & Noble, Powerhouse Books and Amazon.com.

Before coming on the show, I took a friend’s advice about not taking the interview too seriously. Even Phoenix herself said it was about hanging out, talking and whatnot. Phoenix herself is a very nice person. We talked about a few different things like female cartoonists, sub-cultural stuff, etc. For the record, I’m no expert about all of this so-called ‘counter culture’ subject matter. Never claimed to be. Just know what I like. Let’s just say you won’t catch me in front of the TV anticipating Dancing With The Stars. 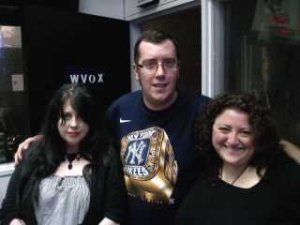 Radio Interview at The Phoenix Perspective, Sat. May 15th, 2010

After the show was over, Phoenix was nice enough to drive me back to the city. Arriving back in Queens, I was embarrassed to find the Soul Train chugging on next door. Apparently my next door neighbors were ass enough to throw a loud house party, continuing past 3am. Despite this, it was still a fun night.

You can listen to the show here: http://podcastmachine.com/podcasts/4573/episodes/22835