Through a friend’s posting on Facebook, I discovered this: 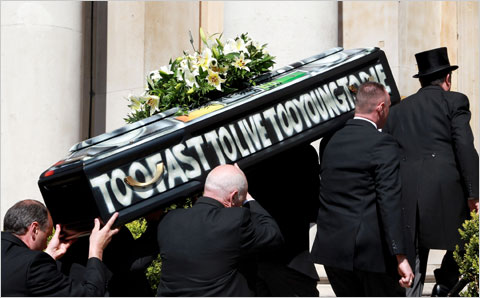 It reads on McLaren’s coffin, “Too Fast To Live Too Young To Die.” Now I have to laugh. Don’t know about you, but age 64 wasn’t that young. Actually, it qualifies for AARP membership. McLaren didn’t have that long of a lifespan, but it wasn’t that short either. Plus, McLaren led a life full accomplishments. Regardless what one may think about this twisted impresario, he was a man of many achievements.

In the New York Times online article, it mentions fashion designer and former McLaren girlfriend Vivienne Westwood. At McLaren’s funeral, Westwood was wearing a headband with the word “Chaos.” 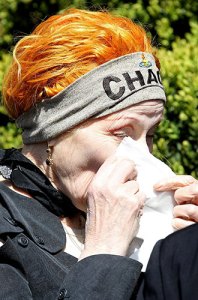 Part of me is snickering at that so-called styling, and a part of me thinks its absolute brilliant. Would have to admit though, when its time for your “Greater Feast” one should leave this earth with style. It’s sheer genius to have a coffin embrazed with a slogan from your personal philosophy. Like you only life once right? So on that same accord, since you only die once, you should go out with with style.

A fine example is the king of Gonzo himself, Hunter S. Thompson. Back in August 2005, his ashes were fired from a cannon during a private ceremony. The cannon was shot from a tower from Thompson’s own design along with red, white and blue fireworks. The tower design itself was in the shape of a double-thumbed fist clutching a peyote button. If that’s not pure Americana, then I don’t know what is.

Perhaps its time for some candid honesty. When its my time to go, I want to have a funeral to die for. Get it? “To die for”…? Okay, bad joke, but anyway. Certainly wouldn’t mind having an awesome looking coffin to be buried in. One idea is to maybe have a shiny black lacquered coffin encrusted with a rhinestones. Easy on the rhinestones though, don’t want it to look like a Liberace reject. The rhinestones could be set in an Art Deco style pattern. The inside could be padded with silky white or red satin, with rose pedals scattered on top of my body. Oh, and of course I better be dressed in my finest. Like hell I’m going to meet my maker as if I just walked out of Old Navy. I want to be a ‘Dandy In The Underworld‘

That’s just one idea for my burial. I just gave you my Hollywood Babylon theme. Other themes could be Egyptian, Norse, or just have a coffin with Santa Muerte’s likeness painted on top of the lid. Ah, the endless possibilities. Get it? Okay, another bad joke. When it comes to death, I’ve got a ton of them. Whether or not they’re actually funny is besides the point.

Another thing…don’t know if I would want people to cry at my funeral. I don’t even know if people are actually gonna attend my funeral, but whatever. Wouldn’t be nice to turn mourning into a party instead? Have a celebration about the life one lead instead of wiping away tears with a snot filled Kleenex. Doesn’t have to be all wild and decadent, but a few cocktails in my honor would be nice.

Remembering back to when I was a small child, I would sit in my bed terrified of death. (I was a strange child to begin with.) As I grew up in Queens, NY, slowly I became fascinated with various graveyards nearby my neighborhood. After all, Queens is the land of the dead. No wonder I had spent my high school years as a ‘Death Rocker.’ (That’s a ’80s term for Goth, again those who don’t know.) Going back six years, I used to watch television shows like Six Feet Under and Dead Like Me. Guess I’ve accepted the dark cloud that hoovers over me.

However its not like I think about death 24-7. I’m just not as freaked out about the concept of death like I was during my childhood. Death is one of the eternal mysteries, just like love and sex. Besides, I believe that hell is right here on earth. Especially since the majority of us humans seems to be bound by our attachments. Doesn’t matter whether the attachments are material, cardinal desires, illusions. Attachments that bring forth pain if not dealt with properly. I still have a few attachments of my own, but at least I’m working on them.

Kudos does go to Malcolm McLaren. Why? It’s due to the fact that he (or whoever handled his funeral) made it unique, and a final lasting statement.

Oh, and btw, relatives of McLaren are asking for a “minute of mayhem” today as he is buried in London’s Highgate Cemetery.