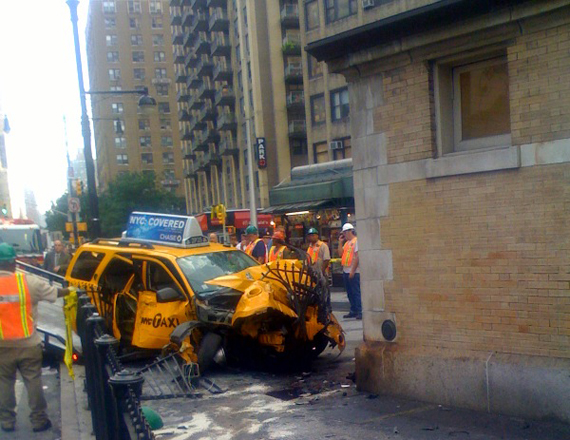 Hey, first of all, I understand that the task of driving a cab is rather thankless and rough. As a livery person, you gotta deal with obnoxious drunks, bad tippers and overall rudeness. It could even be dangerous, for the next passenger might even have a gun hidden in his pocket. Next thing you know, the cab driver’s brains have spilled all over behind the steering wheel.

Some cab drivers are basically making ends meet until their next big break, a la like that 70s TV show ‘Taxi.’ Your next cabbie could be a struggling actor, artist, writer, musician, or even going for his/her PhD. Some cabbies have even been considered “heroes” helping delivering babies from the back seat, or saving passengers from a certain fate…

I have yet to meet cab drivers who possess some of the above mentioned qualities.

Perhaps its my “karma” or “cause and effect”…but I’ve had some pretty lousy experiences with the yellow cab world. Sure, I’ve met some really nice cabbies. I wish I could meet more. For example, I had a cab driver rush me home so I could pick up my tickets and arrive on time to catch Throbbing Gristle in concert. (Throbbing Gristle was touring through the US at the time, Spring 2009) Unfortunately in my case, the cons have outweighed the pros.

In the looks department I’m not even all that. So imagine if a really hot chick gets in the back seat of one those awful cab rides.

Ironically, as I type this, I remind myself of a song I used to listen to during my tween years. Either the last year of junior high or freshman year in high school. Someone gave me a cassette copy of that Prince album “1999.” One of the songs from that album was “Lady Cab Driver.” To this day, I still think that song is hot. As in sexy steamy hot. Raw sexuality in the back of a cab, no questions asked. No thoughts of happy ever after, just him and the lady cab driver getting it on. Sometimes people just wanna screw.

Lady cab driver, roll up your window fast
Lately trouble winds r blowin’ hard, and I don’t know if I can last”

I never wanted the white picket fence with the SUV and being the queen of the soccer team. Romance, sure, but I never had that pre-Desperate Housewife fantasy. Lady Cab Driver though…now that was a hot fantasy. Hard, sweet aggression and with each thrust translates all that frustration into the best fuck you’ve ever had. Now that was a fantasy. One of my fantasies. Oh yeah baby, you can take your frustrations right out on me, right here in the back seat.

“This is 4 the cab U have 2 drive 4 no money at all
This is 4 why I wasn’t born like my brother, handsome and tall
This is 4 politicians who r bored and believe in war
This — Yeah, that’s 4 me, that’s who that 1’s 4
This is 4 discrimination and egotists who think supreme
And this is 4 whoever taught U how 2 kiss in designer jeans
That 1’s 4– That 1’s 4– 4 U have 2 live
This 1’s 4 the rich, not all of ’em, just the greedy —
The ones that don’t know how 2 give
This 1’s 4 Yosemite Sam and the tourists at Disneyland
And this 1– ooh! Yeah — That’s the 1.
That’s 4– that’s 4 the– the creator of man
This is 4 the sun, the moon, the stars, the tourists at Disneyland
This is 4 the ocean, the sea, the shore
This is 4– and that’s 4 U, and that’s who that 1’s 4
This is 4 the women, so beautifully complex
This 1’s 4 love without sex
This is 4 the wind that blows no matter how fast or slow
Not knowing where I’m going
This galaxy’s better than not having a place 2 go
And now I know (I know)”

Back to reality. Now if I had a hot cab driver, maybe I would consider these propositions. Just maybe. I seriously doubt I will find stinky, cranky, nasty men as sexy as that song. Sorry, pot bellies, mumbling immigrant accents and being an overall asshole just doesn’t do it for me.

How’s this for an example?

I rest my case.

Now the reason why I’m venting virtually for the world to see. Last night, me and the boyfriend got invited to the movies. The latest Terry Gilliam flick was showing in the AMC near Lincoln Center. So after ‘The Imaginarium of Doctor Parnassus’ was over (Pretty good film, actually. Maybe I’ll post about it some other time…) we decided to head over downtown. The heavy rain led to our decision to take a cab. The weekend before I had gone to a holiday party over at Jim Hanley’s Universe. Thanks to the heavy snow, three cab drivers refused service to me and my friend. Because they didn’t want to take us to Queens. So I wasn’t exactly thrilled to take a cab the following weekend. Yet it was raining so…we get a cab.

Me, Bejay, his partner Kevin and my boyfriend get inside the cab. The boyfriend gets in the front seat next to the cab driver. As me and Bejay talk about the film, the cab driver begins his own conversation with the boyfriend. He starts off by asking Ben (the boyfriend) how his year has been going. Of course, Ben is the type of person who sees the dark lining in every cloud. So his answer was as woeful as ever. The cab driver offers the solution to all of Ben’s ‘problems.’

“What you need to do” suggested the cab driver “is to eat more pussy.”

Mr. Pussy-Eating Cab Driver was on a roll. He bragged to his ‘captive’ audience about how wonderful eating pussy can be. His technique to getting as much pussy as he can is to hold down two jobs. He’s a school bus driver by day, and a cab driver by night. Sarcastically I remarked that he since he drives a school bus, he must get plenty of ‘young’ pussy.

Not catching the snark in my remark, he proclaims “Oh yes!!! Young pussy is the best!!!”

I took a look at the world’s biggest pussy expert in the yellow cab universe. He looked like a real skanky, greasy version of Borat. Only his hair was longer and slicked back. Slicked back in case he wanted to eat more pussy. Less hair in the way. Come to think of it, I’m surprised he didn’t have a goateee, aka a “taste saver.” But I suppose with just the facial stubble, it would be easier to wipe off those extra vaginal excretions.

“How about those Cleveland Browns?” Bejay chimed in again, trying to change the subject.

Ben takes out his cellphone to show cab driver that as a matter of fact, he does get pussy, thank you very much. On the display window on his cellphone was a pic of me. You know, the type of photo a girl sends to her guy when they’re first dating. It was a sexy one of me posing in a black bra. I still can’t believe Ben has that pic still on his cell. I still can’t believe Ben showed this pussy obsessed cab driver a photo of me. What the hell was Ben thinking? “Don’t show him that photo!” I snapped, “Put that away!”

Anyway, as Ben shows the cab driver that not only does Ben get pussy, but that his own pussy is sitting in the back of the cab. This very cab. Wrong move of course. I was proclaimed by the cab driver that I was “hot pussy” and if he was Ben “he’d make sure he get a job so he can keep on getting that pussy.”

Now here’s the clincher: we reach our designation in the West Village. The cab driver tries to convince Ben to pay the fare in cash. However, Bejay took his credit card, and swipped it in time saving Ben from paying the fare. I think the cab driver knew Bejay had paid the fare, but was still trying to take the cash from Ben. So he could be paid twice as much. His crummy little scam failed, because there was three witnesses from the back seat compared to the one passenger in the front seat. So the pussy eating cab driver got (pussy) whipped, forcing to pay Ben back. He grumbled during the refund, then swiping the receipt and crumbling it up before we had a chance to ask for it. In case we just might file a complaint.

So the cab driver sped off in search of more pussy. My thought was this…if he was getting so much pussy, then why the hell was he spending his Saturday night driving a cab? Isn’t Saturday night prime pussy time? The hell. Then again, there was the possibility of the cab driver, with all the pussy innuendos, was actually making a pass at Ben. As in reverse psychology. He wasn’t sure enough to outright make a homosexual advance, so he started talking about pussy. In case. Not the first time guys have dropped sexual hints towards Ben. Only Ben didn’t find the humor with this cab experience. I couldn’t help but laugh though. It was absurd to begin with.

The saddest part was that the cab driver’s prophesying the joys of pussy had been wasted. His proclamation was spent on two gay men, one woman, and her boyfriend who actually doesn’t have a problem eating pussy. It would’ve been nice to have that speech heard by men clueless about female oral satisfaction, but I guess that’s fate.

And you wonder why yellow cabs have the same color as piss.